Automatically expelling all students found guilty of rape is a perfectly defensible policy, but only if guilt is adjudicated in an actual criminal trial. 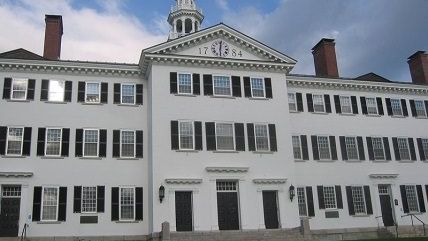 Dartmouth College is now expelling all students found guilty of sexual assault through the campus judiciary process. Inside Higher Ed notes that automatic expulsion is precisely what many activists want, although some colleges have settled on a dubious compromise: make convictions clear and easy but punishments light.

It's a compromise that pleases no one—and shouldn't. Universities are essentially letting the convicted off lightly as compensation for the fact that the campus judicial process—which often does not following normal rules of evidence or due process—is fundamentally unjust. As Inside Higher Ed notes:

The compromise may be doing little to appease either side, with lawsuits still being filed by the accused and protests being staged by survivors and other students. Dartmouth's decision received praise from some student groups and safety advocates, but other colleges and universities may be slow to adopt similar policies, even as many advocates for sexual violence survivors are pushing for expulsion to be the default punishment.

… In recent months, a handful of institutions, including Amherst College, Duke University and Vassar College, have put more emphasis on expulsion as a penalty, but stop short of making it mandatory. Duke's is perhaps the closest to Dartmouth's, with a policy that refers to expulsion in cases of sexual misconduct as the "preferred sanction." For the most part, however, colleges and universities still decide upon expulsion on a case-by-case basis, as they would for many other types of misconduct on campus.

No criminal charges have been brought against any of the men, and neither of the universities has a default expulsion policy for cases of sexual assault. Instead, they follow the Campus SaVE Act's broader requirement for addressing assaults, which only mandates that university policies include "possible sanctions or protective measures" that institutions can impose in cases of rape, sexual assault, and other kinds of domestic and dating violence. [Emphasis added.]

Is it wrong to expect that when a student becomes the victim of a sexual crime, that person should notify the police and seek justice under typical criminal procedures? Does student status confer some special right to have criminal complaints adjudicated under a much lower standard of evidence, with fewer rights retained by the accused?

Automatically expelling all students found guilty of rape is a perfectly defensible policy, but only if guilt is adjudicated in an actual criminal trial.