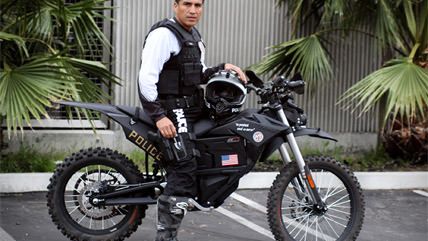 The Los Angeles Police Department (LAPD) recently bought a couple of military-grade motorcycles. The bikes are electric, silent, a sleek shade of all-black, and the LAPD can't wait to use them to harass homeless people.

"There are major benefits to incorporating these environmentally friendly motorcycles. It costs less than 50 cents to charge compared to using gallons of gas, maintenance is simple, and the community appreciates how quiet they are," said LAPD Off-Road Unit Officer Steve Carbajal in a press statement about the three new Zero MMX motorcycles. "Most importantly, our officers have an added tactical advantage while on patrol."

Where exactly do LAPD officers find themselves employing this new tactical advantage? "They're able to sneak up on some of the homeless encampments and some of the illegal activities in the hillsides," Lt. Andy Neiman explained on Monday. He assures that "the community loves" the bikes, because they don't make "that whiny noise that is commonly associated with the off-road bikes."

On the bright side, at least the Zero bikes being used in this pilot program "cost roughly $17,945 without additional department modifications, compared with the approximately $35,000 for a fully-equipped LAPD Harley or BMW," according to CBS. Though, the bikes need to be plugged in for seven hours to fully charge and then they only last two hours on the road.

This is another eyebrow-raising case of continued militarization of domestic law enforcement, particularly within the already-armed-to-the-teeth LAPD. Wired describes the Zero MMX as a "special forces-specific bike," and that's no exaggeration.  "We developed it for the U.S. military. I'm not allowed to comment on the specifics, but we have a contract with the military, and they are testing it," a representative of Zero Motorcycles told Wired. Indeed, the Zero MMX isn't even for sale to civilians.