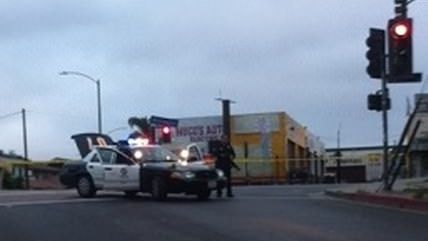 Almost a year ago, I reported from my own living room the experience of being trapped and surrounded by police in my community, not being allowed to leave for most of the day because somebody early in the morning shot at a couple of officers at the nearby station.

Now, after months of analysis, a police investigation says (pdf) it is unable to prove that anybody actually shot at the two officers. There was a man there and the two police officers shot at him, claiming the man opened fire on them and ran away while shooting at him. But the police are unable to prove that this man (whom they've never found) had a gun or shot at the police at all. The two officers involved shot more than 30 bullets between the two of them but didn't appear to hit anybody. It may have been for the best that they missed because despite saying in the investigation that this suspect fired a weapon at them, "A thorough examination of the officers' vehicle and the surrounding area revealed there were no impacts of other physical evidence to support that the Subject fired a weapon." There is some rough surveillance video of this man running across the street from the police station, but though they can see the guy extending an arm toward the officers, they cannot see what he's holding other than at one point, an unidentified object in his right hand.

The police car, an unmarked vehicle (the officers were in plain clothes, returning to the station from an assignment) did have damage to it, but it turned out one of the officers unintentionally fired off his gun four times inside the vehicle. Nothing was recovered to indicate they were actually ever shot at.

The report protects the identities of the officers involved, but the Los Angeles Times names them as Det. Humberto Tovar and Officer Bernardo Romero. Tovar has a history:

Tovar's history in the department added another level of intrigue to the case. He was fired in 2000 after his former partner, corrupt ex-officer Rafael Perez, accused Tovar of being complicit in a plan to plant drugs on a suspect. A judge later reinstated Tovar, finding that the firing had been improper.

Tovar was also accused of misconduct in a shooting. A corrupt officer told federal authorities of a conversation he had with Perez, who was the central figure in the department's Rampart scandal. Perez allegedly recounted a time when he had fired his gun. Tovar then allegedly fired his gun as well, not because he was in danger, but in an effort to make Perez's actions appear more justified, court records show.

Tovar fired 23 rounds during the incident, and the report indicates he shot at the suspect first. Romero is the one who responded by accidentally shooting into the roof of the police car.

Nonetheless, the Los Angeles Times notes, the police department is supporting the two men, saying their stories and statements by a witness corroborate the claim that the men believed they were being shot at. Even the review from the Board of Police Commissioners concludes that the potential use of deadly force was justified—even without any real proof they were ever shot at. That review recommend "Administrative Disapproval" for Tovar and a "Tactical Debrief" for Romero for the unintentional discharges and for some poor tactical decisions (apparently at one point Tovar had exited the car and was using it as cover to shoot at this subject while Romero was still in the car, creating a crossfire risk).

Over this incident, the police shut down an entire community. People were trapped in their homes by LAPD blockades at nearly every intersection. The blockade included dozens of restaurants and stores that lost untold amounts of money. Mid-city, where this occurred, is an interestingly diverse community, both ethnically and economically. Poor neighborhoods butt up right up against wealthier ones. I live in a poorer, working-class part of the community that is primarily Latino and African American. I wonder if there's any way to calculate how much was lost from the community's economy, both from lost business as well as lost wages. Sadly, this report doesn't analyze whether it was appropriate or even tactically useful for the department to respond to this incident as though it were the Boston Marathon bombing; though the failure of the police to catch this mystery guy speaks volumes.

Also, I guess I'll have to keep in mind that the police station within walking distance of my home employs a detective who had previously been fired for alleged participation in a plan to plant drugs on a suspect.