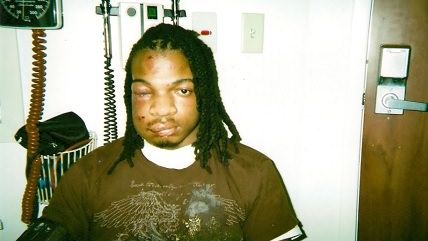 Jordan Miles was an 18-year-old high school music student going to his grandmother's house on a January evening in 2010 when three undercover cops tried to approach him, later saying the teenager had looked "suspicious" and seemed to be "sneaking around." They also said they thought a Mountain Dew bottle inside his coat was a gun.

The three officers then beat the teenager up, punching him in the face, kneeing him in the head, and tearing off a clump of his hair. As Balko wrote, Miles, who is black, would seem justified to run whether or not he knew the plainclothes white men approaching him were actual police officers. Police dispute the account, saying Miles fought them while they tried to question him and then ran. They charged Miles with assault, resisting arrest, and other crimes. They were dismissed by a city magistrate who did not find the police account believable.

Miles sued. In 2012 a jury rejected Miles' claim that police maliciously prosecuted him. A retrial ended in March, with a jury reaching a split verdict. Miles was awarded $119,000 for being falsely arrested—enough to cover his medical bills plus $60,000. Each of the three cops was "assessed" $6,000 in damages, which the city will be paying. The jury, however, dismissed Miles' claim of excessive force by police.

Both sides are now seeking to see the verdict altered. Miles' attorneys argue that any force would be excessive if the initial arrest was false. The city, meanwhile, wants the award reduced based on a previous settlement over Miles' medical bills.

After the verdict the attorney for one of the cops said the police officers did nothing wrong. "Knowing these three officers?and we've talked about it?they'd do it all over again. They did nothing wrong. They have nothing to be ashamed of," said the attorney for Officer Richard Ewing, who now works in McCandless, Pennsylvania. He dismissed the verdict as a "sympathy" ruling. The other two cops, Michael Saldutte and David Sisak, remain on the force in Pittsburgh.