Students For Liberty Against Ron Paul on Crimean Crisis 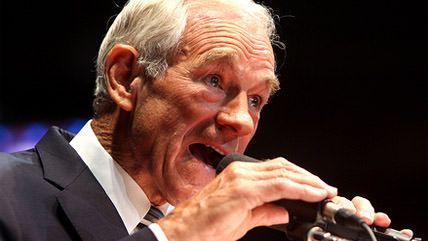 Former Congressman Ron Paul (R-Texas) has been outspoken about his views on the crisis in Crimea, where a recent referendum transferred the peninsula from Ukrainian to Russian control. Paul, known for not holding back when he believes in something, is undoubtedly used to being criticized. This time the backlash might hit a little closer to home, though: Students For Liberty (SFL) has come out against Paul for his views on Crimea.

Alexander McCobin, an SFL co-founder, issued a statement warning that Paul should not be seen as "wholly representative of the libertarian movement" and that he "gets it wrong when he speaks of Crimea's right to secede."

Paul has expressed support for the secession, arguing in an op-ed last week that the Crimean push was all about "self-determination." He brushed aside the Russian military presence as insignificant enough to warrant scare quotes when describing the "occupation."

McCobin doesn't buy that. He writes:

Make no mistake about it, Crimea was annexed by Russian military force at gunpoint and its supposedly democratic "referendum" was a farce. Besides a suspiciously high voter turnout with legitimate international observers, the referendum gave Crimeans only two choices — join Russia now or later.

He also describes Paul's stance as "too simplistic" and "fail[ing] to see the larger picture" of Russia's significant human rights violations. McCobin ended by expressing support for Paul's son, Sen. Rand Paul (R-Ky.), who has taken a more critical stance on Russia.

A different SFL representative assured Buzzfeed that none of this is to say that the organization supports American military intervention in the situation.

Although Paul is not directly affiliated with SFL, the group has in the past expressed warm feelings for and worked to advance ideas proposed by the libertarian movement's most recognizable voice.