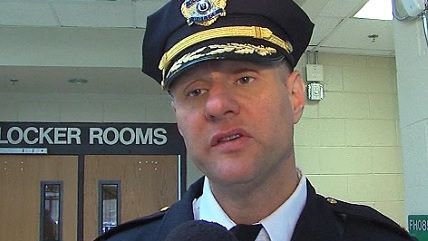 The police department in Cranston, Rhode Island, was accused late last year of issuing more than 100 parking tickets in two wards that were represented by City Council members who voted against a new police contract in November. The city's police chief, Marco Palombo, was put on paid leave in January after an internal affairs investigation into the allegations bagan.

But Marco Palombo won't have to pay for the apparent act of political corruption and abuse of power. This week, Cranston's mayor decided to reinstate Palombo so that the police chief could retire with a full pension. Via the Providence Journal:

Mayor Allan Fung reinstated Palombo Monday for the "sole purpose" of allowing him to retire.
"It was the right thing to do," Fung said in a statement. "It is time for new leadership in the Cranston Police Department."

Palombo will retire with pension benefits..…

[When he suspended Palombo in January, the mayor said] that a number of police officers were under suspicion of misconduct. His placement of Palombo on leave came one day after the mayor announced he had asked the state police to investigate, which, he said, would also help "restore confidence in the city of Cranston, in city government and our police department."

Whatever attempts Fung may or may not have actually made to "restore confidence" in the local government are doomed to fail in the wake of this news.  A lawyer for the police union says the union's president ordered the increase in ticketing, but the fact that the order came down the night before the vote on the contract was, uh, coincidental.

The notion that the union president, and not the police chief, is giving orders to police officers, who are still public employees, ought to concern any Cranston resident interested in the rule of law. Fung's mission to restore confidence seems hopeless, though voters in the city may not care. Fung, a Republican, was re-elected with 97 percent of the vote in 2012; he was the only name on the ballot.

To add insult to injury, the outgoing police chief claimed in his statement that he had "accomplished the professional goals I set for myself and the department when I was appointed" and that he's ready to "take on new challenges." All while continuing to receive money from taxpayers he's been accused of abusing.