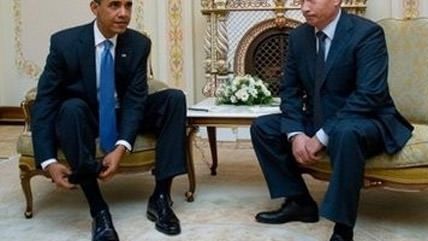 Like someone who can't help but give their Adidas track pants-wearing ex a second chance, the Crimean peninsula voted yesterday to join the Russian Federation. With this victory, Russia is appearing more aggressive; there are reports of a blockade in yet another region of Ukraine, and state-run media is taunting the U.S. with nuclear threats.

Although reports indicate that achieving 96.7 percent approval of the referendum in the military-occupied territory involved some creative tactics, such as herds of unregistered voters getting OK'd and individuals exercising their right on multiple ballots, it seems like there's no turning back. Some ethnic Ukrainians and Crimean Tatars considered the legislation illegal and boycotted the vote, but don't know how to right the situation.

One Tatar politician said, "I don't know of any situations in the history of human civilization when injustice could be the basis for even the slightest positive expectation of things changing for the better."

A Turkish news agency spoke to some Crimean residents who said they may simply leave the region and move to the Ukrainian mainland.

Russia's appetite for annexation may not yet be satisfied, though. Tens of thousands of Russian troops began conducting training exercises along the eastern border of Ukraine last week. Today, echoing the action in Crimea before the invasion, Ukrainska Pravda reports that 50 armed members of a so-called "Anti-Fascist Committee" wearing symbols of the Russian military are setting up roadblocks in one eastern region.

Judging by reports on Russia's state-controlled television stations, threats from the West aren't accomplishing much. The independent Moscow Times reports:

An anchor on state-run television threatened that Russia could "turn the U.S. into radioactive ashes" and showed a simulation of a Russian nuclear strike during his program on the U.S. response to Russia's interference in Ukraine.

Dmitry Kiselyov… accused U.S. President Barack Obama of supposedly dithering in talks with President Vladimir Putin, and suggested on his Sunday program that the U.S. leader was intimidated by his Kremlin opponent, who is "not an easy one."

Kiselyov also suggested that threats of a nuclear strike were coming from the Kremlin.

"I do not know if this is a coincidence or what, but here was Obama calling Putin on Jan. 21 — probably, again trying to pressure somehow — and the very next day, on Jan. 22, the official media outlet of the Russian government ran an article that spelled out in simple terms how our system of nuclear response works," he said.