Vladimir Putin: The Biggest Loser in Sochi and Ukraine 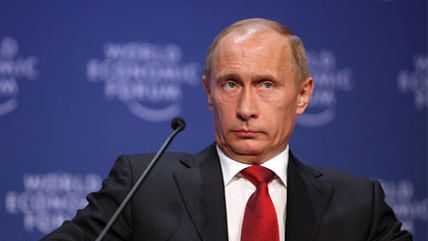 With the rapid developments in Ukraine, it is difficult at this point to make any predictions. No one knows how far Russia's now-certain military intervention will go—or whether the revolution that ousted pro-Russian president Viktor Yanukovych will succeed in steering the country toward freedom and prosperity. But one thing is already clear: the past two weeks' biggest loser is Russian president Vladimir Putin, whose rout in Ukraine has further soured the already dubious triumph of the Sochi Olympics. It is almost a storybook tale of hubris, humiliation, and poetic justice.

Both Sochi and Ukraine have been, for Putin, intensely personal high-stakes projects. The Sochi Olympics were going to be a showcase for the might and splendor of the new Russia. Ukraine was going to be the biggest piece in rebuilding the post-Soviet Russian Empire.

It is important to remember that the 2004-2005 "Orange Revolution" in Ukraine (its name derived from the ribbons worn by protesters in the huge demonstrations that led to Yanukovych's first ouster, forcing a revote after he stole an election) played a key role in shaping Putin's attitudes. The spectacle of his ally's downfall caused him to become far more hostile to domestic dissent and far more paranoid about foreign threats.

In the official lingo of the Kremlin and its loyalists, "orange" became a generic term for subversive movements supposedly created and manipulated by Western powers for the purpose of installing friendly regimes. It is very likely that Putin and the Putinistas sincerely believe their own propaganda: the idea that people would spend days camping out on a square in the bitter cold simply because they are outraged by election fraud simply does not compute in their thoroughly cynical minds, so the alternative explanation must be that someone is paying them off. (That "someone," of course, is the perfidious West, and Uncle Sam in particular.) The pro-Kremlin media and leaders of loyalist groups have routinely spoken of "the orange threat" within Russia itself, using the word as a slur against the opposition.

In the last several years, Putin saw a chance to bring Ukraine back into the fold. The Orange Revolution ended in disenchantment as its leaders, President Viktor Yushchenko and Prime Minister Yulia Tymoshenko, failed to improve the economy or rein in corruption and became mired in squabbles. The once-popular Yushchenko received just over five percent of the vote in the first round of the 2010 presidential elections; Tymoshenko was narrowly defeated by Yanukovych in the runoff. (In view of Russian complaints about pro-Orange U.S. interference, it is ironic that Yanukovych owed his victory in large part to an image makeover assisted by American political consultants with Republican Party ties.)

As Ukrainian journalist and political analyst Olena Tregub noted in a 2010 article, Yanukovych's victory did not represent a rejection of the Orange Revolution's ideals. While stressing friendly ties to Russia, he also advocated a closer relationship with the European Union, stating on more than one occasion that EU integration was a top foreign policy priority for Ukraine and was not only a strategic goal but a "civilizational choice."

Last fall, it seemed that Yanukovych would live up to his promises: Ukraine was poised for a major trade deal with the EU that would have put it on track to eventual EU membership. But Putin was not about to let that happen. Moscow stepped in, employing its usual carrot-and-stick tactics to scuttle the agreement: threats of trade retaliation coupled with promises of benefits if Ukraine backed out. On November 21, Yanukovych announced that the deal was off—sparking nonstop protests on Maidan Nezalezhnosti (Independence Square), the birthplace of the Orange Revolution. The announcement, on December 17, that the Kremlin was rewarding the Yanukovych regime with a big discount on natural gas and $15 billion in purchases of Ukrainian government bonds, further angered the opposition: the sweetheart deal—which Yanukovych openly admitted had been fast-tracked by Putin—was seen as evidence that the regime was selling out Ukraine's national interests. Few doubted that Russian largesse would benefit primarily Yanukovych and his cronies and henchmen, not ordinary Ukrainian citizens.

The rest, of course, is now history.

Putin must be overjoyed: he wanted to keep Ukraine from making the European choice, and he managed to pull it off. But in reality, he has lost Ukraine, because people will now link the collapse of their hopes not only with Yanukovych but with Russia. … Even as he engages in a mythical confrontation with the West and Europe, Putin de facto undermines his country's prestige in the eyes of the nations most favorably disposed toward Russia.

Even in the event of Kremlin-backed Crimean secession, the fact remains that Ukraine has decisively rejected Russia's patronage—and the question of "who lost Ukraine" for Russia has a simple answer: Putin. His determination to prevent Ukraine's rapprochement with the EU has backfired beyond his worst nightmare.

Indeed, intervention in the Crimea (where, at last report, Russian troop movements around Russia's naval base in Sevastopol have been accompanied by the activities of pro-Russia armed militias elsewhere) may backfire even more.  As Portnikov points out in a new column, while Russia may succeed in engineering Crimea's secession and turning it into a pseudo-autonomous client state, the costs of such a move (both political and economic) are likely to outweigh the benefits.  Crimea's economy revolves heavily around tourism—mostly from Ukraine. As a de facto occupied hot spot, the region will require major subsidies to stay afloat. What's more, even if most of its ethnic Russian majority supports Russia, divisions will still loom large. Besides the local Ukrainians, there are Crimean Tatars (280,000 strong and making up about 13 percent of peninsula's total population), who have little affection for Moscow; complicating matters even further, Turkey takes a strong interest in their situation.

The fact that this crisis unfolded right in the middle of the Sochi Olympics has an almost uncanny symbolism—particularly since the Olympics, like the dream of imperial revival, were a monument to Putin's hubris. Andrew Kuchins, director of the Russian program at the Center for Strategic and International Studies, told Philadelphia Inquirer columnist Trudy Rubin that the Olympics had never before been "so identified with the leader of the host country." And yet Putin's attempt to play Olympian god ran into a series of largely self-inflicted defeats—from the pick of a semitropical location with a climate ill-suited for winter sports and with no infrastructure to support the games (but one that just happens to be Putin's favorite vacation spot) to exceedingly bad pre-Olympics press over Russia's new anti-gay legislation.

What next for Putin? As he watches Ukraine, there is little doubt that the Russian leader has nightmare visions of Russia turning orange. In the short term, Ukraine's revolution will likely mean an even harsher crackdown on the opposition in Russia to prevent such a development; it is also likely that the violence of the past few days in Kiev will be used by Russian propagandists to frighten Russians into believing that authoritarianism is the only alternative to deadly turmoil. But if there's one thing the events in Ukraine show, it's that the best-laid plan of authoritarian strongmen often go awry.

An earlier version of this column appeared at Real Clear Politics.