Says if it were up to him, he'd wait 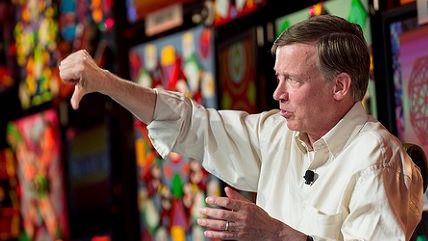 In November 2012, Colorado voters approved a scheme to legalize, regulate, and tax marijuana in their state, opening up a whole new revenue stream for local and state governments while instilling fear in the hearts of drug warriors who profit from the continued criminalization and demonization of marijuana and other narcotics.

The state's governor, however, doesn't think other states should follow Colorado's lead. The AP reports on the recent National Governors Association meeting:

Colorado Gov. John Hickenlooper is warning other governors against rushing to follow his lead.

He said he's spoken to "half a dozen" governors with questions about his state's experience, including some who "felt this was a wave" headed to their states.

"When governors have asked me, and several have, I say that we don't have the facts. We don't know what the unintended consequences are going to be," Hickenlooper said. "I urge caution."

The Democrat continued: "I say, if it was me, I'd wait a couple of years."

Thankfully for Colorado residents, it wasn't up to Hickenlooper, it was up to them to decide to move Colorado toward a saner marijuana policy. So far, most places in the United States that have moved toward legalizing marijuana, be they Colorado or Washington or any of the local municipalities that have gone in that direction, have done so through various ballot initiatives. In Alaska, where the courts effectively legalized the consumption of marijuana in 1975, voters are moving toward putting the actual legalization of marijuana. Alaska was one of five states I suggested could be next to legalize marijuana.  Residents in all of them will likely have to rely on voters in their state to legalize marijuana, because as Hickenlooper illustrates, the politicians don't have the spine, and the drug war's a good hustle for politicians and other government employees.