If the DA wanted to assure the public he was taking the incident seriously, why'd he team up with the cops? 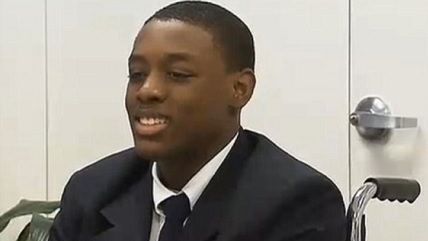 Philadelphia's district attorney says he doesn't usually confirm ongoing investigations, but when he does it's because he wants the city to know that his office is doing something about something. In this case, the DA has confirmed an investigation into an incident where a female officer allegedly frisked a teenager so violently she ruptured one of his testicles. But in coupling the announcement that his office has been investigating for several weeks with an announcement that the DA and police would combine their efforts sends a pretty mixed message. Via the Philadelphia Tribune:

"We don't normally confirm ongoing investigations," Williams said. "But given the nature of this case, we felt it was important to let the public know that we have been vigorously investigating this case since it occurred. Both the police commissioner and I have worked extensively to combat the perception that justice is not dispensed equally in Philadelphia, and that is why we are joined together today. We are using all the tools available at our disposal to bring this to a fair and just conclusion. And as has been the case since I took office in 2010, we will continue to investigate and prosecute every person in this city who has committed a crime, no matter who they are."

When asked if a grand jury was being convened to pursue the investigation, Williams didn't say yes or no to that possibility.

"What I stated was that we would be using every means we have at our legal discretion to find out what happened. That is the maximum I can say to answer that question," Williams said. "We're going to do everything that we can. We're getting the Internal Affairs division and the Special Investigations unit of the District Attorney's Office to gather as much evidence as possible; medical records, documents, video tapes, everything that we can to get the truth about what happened that day and report back to the public."

The whole thing doesn't sound too inspiring, a generic comment about going after "every person" who commits a crime in the city ends with a promise to "report back" what his office finds out about an incident that started with a questionable police encounter and ended with a teenager's testicle ruptured. That teenager, Darrin Manning, incidentally, was already charged by cops on multiple misdemeanor counts, including one for resisting arrest. The officer who allegedly ruptured his testicle is as yet unnamed, and presumably uncharged.

The Huffington Post, which does not mention in its story that the DA and police department are combining their efforts, talked to the Manning family's attorney, who explained that he recommended Manning not to investigators from Internal Affairs because that was not an "appropriate party." When the incident was first reported in the media, the police commissioner, Charles Ramsey, like the DA now, wanted Philadelphia residents to know he really wanted to get to be bottom of what happened, but lamented why the teen, who had been charged by cops, wasn't willing to come to them with his complaints. No wonder Ramsey gets the big bucks.