The Creepy Statism of Utah's Defense of Traditional Marriage 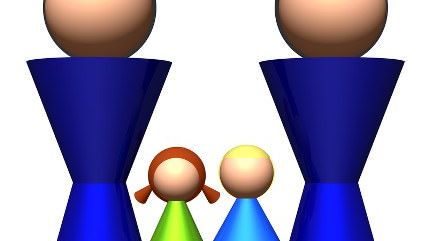 Attorneys for the state of Utah have filed their initial argument, readable here (pdf), at the federal appeals court in order to defend the state's ban on recognizing gay marriages. The 100-page opus can simply be summarized as "It's for the children!"

At the National Review Online's blog, Michael T. Worley summarizes the 15 consequences presented by the Utah to justify the state's involvement in deciding who can and cannot get married. The summary is extremely useful in seeing exactly how certain types of conservatives are just as statist as progressives. In fact many of the arguments have absolutely nothing to do with gay people at all and are all about the state making sure heterosexual people don't get confused or silly ideas about how to have a family if the government doesn't tell them how to do it.

Consider the main thrusts of their fears:

1. "First, as many commentators have observed, because procreation is an inherently gendered affair, redefining marriage in genderless terms would break the critical conceptual link between marriage and procreation. . . . Given the manifest ills of fatherless parenting, the State has a compelling interest in sending a powerful message to women that, whenever possible, marriage to the fathers of their children is very important to the welfare of those children and to society itself."

2. "Second, for similar reasons, the loss of the State's clear message in favor of biological mother-father parenting within marriage would likely result in a higher percentage of couples conceiving children without the stability that marriage would otherwise bring."

3. "Third, replacing the child-centric or 'conjugal' view of marriage with a more adult-centric view would undermine the existing social norm that often leads parents in acceptable but not ideal marriages to make self-sacrifices and remain married to the parents of their children."

4. "Fourth, by shifting the understanding of marriage to a more adult-centric view, the redefinition ordered by the district court would also undermine the current social norm (weakened though it may be) that those who wish to have children—or to engage in conduct that could lead to children—should get married."

Yes, the main arguments against recognizing gay marriages is that it will somehow result in fewer marriages. Because heterosexual women will get confused somehow about what marriage is or whether they want one because they aren't getting clear messages from "the state" about what "the state" wants them to do and not because they do or do not want to be married. (And isn't it creepy that it's the women who need the messages about marriage and not the men?)

It gets even creepier:

"Fifth, and most obviously, a genderless definition of marriage would likely increase the number of children being raised by same-sex parents. That could happen because the couple decides to raise together an existing child of one of the partners. Or it could result from the conception of a new child through surrogacy or sperm-donation. Either way, such children will not benefit from the State's preferred mother-father parenting model; often they will have no way of knowing even the identity of both biological parents. And recent evidence on same-sex parenting, while not conclusive, indicates that same-sex parenting arrangements are less effective than married biological mothers and fathers in producing positive outcomes in the lives of their children."

"The State's preferred mother-father parenting model" sounds borderline socialist. Whether or not a child knows his or her biological parents is also not the state's business—are they going to outlaw adoption, too? Really, the state is mostly just asserting that it needs to play a role.

And yes, the widely discredited Mark Regnerus study is referenced. That's the study that compared a wide variety of different kinds of gay familes, whether they were partnered, single, divorced, or what have you, only to stable, married heterosexual families. I wrote about the awfulness of the study's "science" back in 2012.

Also, one of the fears listed as a potential bad consequence of recognizing gay marriage? It's the perpetuation of libertarian views about privatizing marriage! Horrors!

11. "To the extent a genderless marriage definition encourages the further abandonment—or privatization—of marriage, it would  almost certainly reduce birthrates. Studies have shown that cohabiting couples tend to produce fewer children on average than married couples do—perhaps because the resulting instability makes the participants less willing to bring children into the mix. Thus, if overall marriage rates decline further, birthrates would likely decline as well."

The weirdest argument spread throughout is fear that the government needs to make sure birthrates and fertility stay up. The drop in birthrates in Western countries (and even non-Western countries!) is a function of improving economic security and safety. It is not a cause for concern (other than for our poorly-thought-out entitlement systems) and is evidence of the world becoming a better place, not a worse place. Neither Utah, nor America, is in any danger of running out of people. Also, worrying about families having children outside the state-favored marital arrangements and then pivoting to worrying about families not having children outside the state-favored marital arrangements doesn't exactly make a coherent case.