Will Russian Police Attempt to Arrest a Rainbow, Should One Appear at the Sochi Games?

The world is watching the nation's unpredictable anti-gay actions 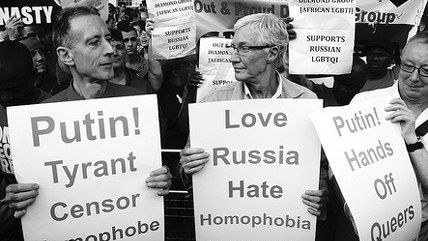 The Winter Olympics kick off at the end of the week in Sochi, and it's still not entirely clear how Russian authorities are going to respond to any objections to the country's increasingly vicious targeting of its non-heterosexual citizenry.

Human Rights Watch has released a "worst of" video highlighting some of the anti-gay violence happening in Russia. Watch below:

Left out of the New York Times report is that one of the main alleged perpetrators of ant-gay violence, Maksim "Machete" Martsinkevich, has been charged with "extremism" for his videos, fled to Cuba, and was extradited back to Moscow to face a trial. So apparently there's some sort of a limit to the amount of thuggery the state will turn its back on, though it's not quite clear what the lines are (going viral, maybe?).

Actually, nothing about Russia's anti-gay anti-"propaganda" law is particularly clear. ESPN points to the confusion about how the law might affect foreign visitors to the Olympics:

Sen. Chris Murphy, D-Conn., the chairman of the European (including Russia) Affairs Subcommittee of the Senate Foreign Relations Committee, has studied the situation and told ESPN.com, "The Russians have said they will not use these laws to crack down during the Olympics, but I would not counsel my gay and lesbian friends to go to the Olympics. We don't know what the Russians will do."

Murphy also notes that Putin and the Russians have "blurred the lines that define what behavior will be viewed as criminal. We cannot determine with any certainty what conduct they will deem criminal."

The Russian anti-LGBT culture is particularly alarming to athletes and activists because Russia's laws and policies equate homosexuality with pedophilia, a position that comes as a complete surprise to Americans and others whose cultures and laws have moved toward increasing acceptance of gays and lesbians, their lifestyles and their rights to marriage and other benefits.

For Murphy and the DRL, it is the Russians' claim of a connection between homosexuality and pedophilia that is both wrong and potentially dangerous.

"Putin is being totally and completely irresponsible when he connects homosexuality and pedophilia. He shows this when he tells gay people to stay away from children," Murphy said.

A Russian journalist has been accused violating the law by creating a social media group called "Children-404" to help LGBT teens share their stories and find support. From RIA Novosti:

The case against Lena Klimova was opened at the request of Vitaly Milonov, an ultraconservative regional lawmaker who has spearheaded anti-gay legislation in Russia.

Milonov confirmed to RIA Novosti that he requested a check into the Children-404 pro-LGBT group on the Russian social networking site Vkontakte.

The group publishes personal statements by Russian gay teens on their struggle for acceptance and against homophobia in the country's conservative provinces.

The group, created by Klimova, inveigles teens into questioning their sexuality, Milonov said.

"Without such groups, no kids like that would exist," said Milonov, who has also campaigned against MTV, modern opera, abortion and the teaching of evolution in schools.

In the meantime, GLBT supporters have targeted Coca-Cola and McDonald's for protests due to their financial support of the Olympics via sponsorships.

Whether the Olympics is going to be a big gay disaster for the Russians is up in the air at the moment. Though it's possible the Olympics could be a disaster even without the gay issues.