Afghan President: U.S. Should Leave, Not Signing Security Agreement Without Peace Talks (on Afghanistan, Not Syria or Israel-Palestine) 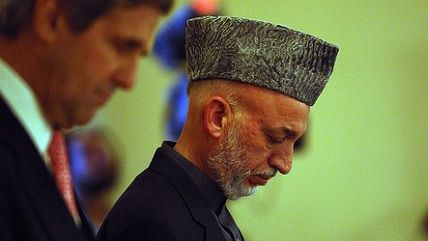 Hamid Karzai wants the U.S. to start peace talks with the Taliban as a condition to signing a security agreement that would govern the American military presence in Afghanistan after this year's "withdrawal," the Afghan president said in a news conference this weekend. The as-yet unsigned agreement (full text) does not specify the level of U.S. and NATO troops to remain in Afghanistan after the end of 2014, although the Obama administration appears to be considering leaving about 10,000 troops in Afghanistan after 2014, "or none". The U.S. also attempted to keep a residual force of 10,000 troops in Iraq past the withdrawal date set in a 2008 agreement between the U.S. and Iraq. Karzai, who is supposed to leave office after a presidential election in April he is not permitted to compete in, is not expected to sign the agreement, and has said previously he'd rather leave that decision up to his successor.

An attempt at peace talks fell apart fairly quickly last summer. Karzai, who skipped a peace conference in Qatar over "foreign conspiracies," insisted Pakistan had to be a part of the conversation. The Taliban in Pakistan withdrew completely from the negotiating table in November, after electing a hardline commander to replace one killed in an apparent U.S. strike.

In his forthcoming memoirs, Bob Gates writes that President Obama was "convinced" the mission in Afghanistan would fail. Gates, Bush's last and Obama's first secretary of defense, left the cabinet a year and a half before John Kerry joined as secretary of state, but given Kerry's intense focus on peace talks over the Syrian civil war and Israel-Palestine, it appears he shares Obama's pessimistic outlook. Yet neither, either, appears ready to do the hard work of extricating the U.S. from the Afghanistan situation, choosing instead to operate based on political calculations as thousands of U.S. and NATO troops remain in Afghanistan with no discernible purpose.