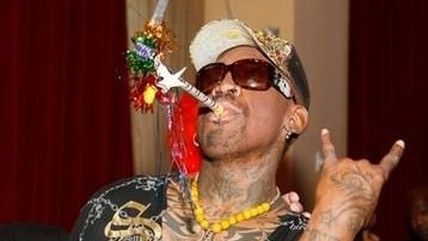 According to The Daily Beast, the State and Treasury departments are investigating whether former NBA player Dennis Rodman broke the law when he gave Kim Jong-un and his wife gifts on his recent trip to North Korea.

The State and Treasury departments are investigating whether Dennis Rodman broke the law on his most recent trip to North Korea, The Daily Beast reports.

The former basketball star reportedly offered luxury gifts to North Korean dictator Kim Jong-un for his 31st birthday, including expensive whiskey and a fur coat for his wife. The gifts would violate the 2010 International Emergency Economic Powers Act, as well as several United Nations sanctions.