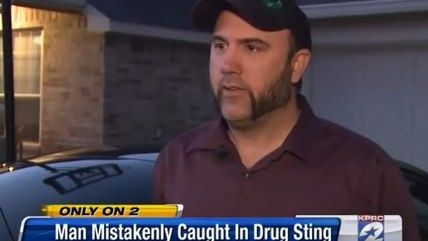 In Houston, a man, while in his vehicle, gives some loose change to a homeless man standing outside in a parking lot, and then all hell breaks loose. According to KPRC 2 in Houston:

After Snider pulled onto I-10, he said a police car with flashing lights and sirens pulled behind him.

Snider said he was shocked by what the police officer did next.

Snider said the officer pulled him out of the car, handcuffed him and put him in the back of a police car, as ten more police cars were also pulling up.

Don't ever consent to a search without a warrant! Nevertheless, the cops found nothing in Snider's car because he didn't have any drugs. He has filed a complaint with the Houston police after his car was damaged in this flurry of activity. Police officials declined to talk about the incident with the news station, though Snider says they were yucking it up on the scene like the mistake was no big deal.

Left unsaid is how absurd the response would have been even if Snider had given the homeless guy drugs. Ten cars? Well, at least for a little while fewer people were getting pulled over for minor traffic violations.