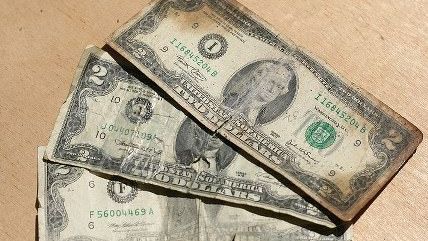 On October 17, Congress suspended the statutory debt limit and let the U.S. government's spendthrift freak flag fly. As I wrote at the time, public debt outstanding jumped overnight by $328 billion. Woo hoo! Those credit card bonus miles are gonna be through the roof!

If it makes you feel any better, the Congressional Budget Office expects, in its long-term budget outlook, public debt to start dropping a bit, soon, as a percentage of Gross Domestic Product. Unfortunately, that's just before it begins a long, steady metastasis that will devour the country's economy.

The consequences of that rising debt, the CBO says, aren't pretty:

How long the nation could sustain such growth in federal debt is impossible to predict with any confidence. At some point, investors would begin to doubt the government's willingness or ability to pay U.S. debt obligations, making it more difficult or more expensive for the government to borrow money. Moreover, even before that point was reached, the high and rising amount of debt that CBO projects under the extended baseline would have significant negative consequences for both the economy and the federal budget:

It's certainly reassuring that lawmakers are diligently hammering out a budget package that actually causes the federal government to spend more money in the future than it would absent the deal and totally ignores the very real fiscal problems that beset the leviathan in D.C.