He was lawless, reckless, and anything but a national treasure 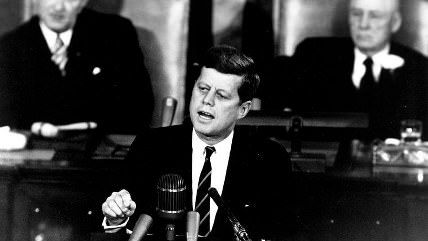 Nov. 22 — a little over two weeks from now — will mark the 50th anniversary of President Kennedy's assassination in Dallas in 1963. But unless you're on a starvation-level "media diet," you probably knew that already.

In a December 1963 interview, the president's widow gave a name to the Kennedy mystique, telling journalist Theodore White of Jack's fondness for the lyric from the Lerner and Loewe musical about King Arthur: "Once there was a spot, for one brief shining moment, that was known as Camelot."

Much more than a "moment," Camelot has proven an enduring myth.

JFK places near the top 10 in most presidential ranking surveys of historians, and in a 2011 Gallup poll, Americans ranked him ahead of George Washington in a list of "America's greatest presidents."

Kennedy's murder was a national tragedy, to be sure, but an honest assessment of his record shows that our lawless and reckless 35th president was anything but a national treasure.

Shortly after the then-Massachusetts Democratic senator announced his presidential candidacy, Kennedy gave a remarkable speech, titled "The Presidency in 1960," outlining a remarkably broad view of the president's duties and powers.

"Today a restricted concept of the presidency is not enough," JFK argued: the presidency must be "the center of moral leadership" — "we must endow that office with extraordinary strength and vision."

And the president "must be prepared to exercise the fullest powers of his office — all that are specified and some that are not."

In foreign policy, Ricks said, "he spent his 35 months in the White House stumbling from crisis to fiasco."

True enough, after being buffaloed into the disastrous Bay of Pigs operation by the CIA, Kennedy helped bring the world to the brink of thermonuclear war in the Cuban Missile Crisis — not because Soviet missiles in Cuba altered the strategic balance of power (they did not), but because, as former Defense Secretary Robert McNamara later admitted, the missiles were "politically unacceptable" for the president.

Moreover, Kennedy's aura of vitality and "vigah" depended on deliberate lies about his medical fitness for office: "I never had Addison's disease … my health is excellent," JFK told a reporter in 1961.

As Kennedy biographer Richard Reeves notes, JFK, who "received the last rites of the Catholic Church at least four times as an adult," was "something of a medical marvel, kept alive by complicated daily combinations of pills and injections," including a psychiatrically dangerous cocktail of painkillers and amphetamines regularly administered by celebrity physician Max "Dr. Feelgood" Jacobson.

Meanwhile, the man who'd pronounced the presidency America's "center of moral leadership" exhibited near-pathological promiscuity with a succession of starlets and stewardesses, groping his way through the White House with all the delicacy of San Diego mayor Bob Filner (though, admittedly, with much more success).

Viewed up close, without the gauze of sentimentality, it's not a pretty picture: "America's prince" looks more like the imperial presidency's Dorian Gray.

That may sound harsh, but 50 years after his passing is not too soon to take a clear-eyed look at JFK's legacy.

This article originally appeared at the Washington Examiner.