School Defends Long Term Suspension of Students For Playing With Air Soft Gun: It's For The Children, Even the Suspended Ones 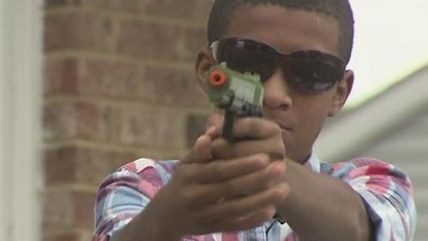 The Virginia middle school that handed down a "long-term suspension" to two students the school claims were playing with an air soft gun in the vicinity of a school bus stop is defending the decision. The two seventh graders were suspended from the school for the remainder of the year after a hearing this week, and another hearing in January will determine whether the two students can return to the school. The parents say the move feels like an expulsion; one child will be sent to an alternative school this year, the other will be homeschooled.

The principal of the school released a statement yesterday defending the disciplinary action by claiming a child "only 10 feet away" was hit despite running away from "shots being fired" (from an air soft gun). The use of a "firearm" by the kids was provided as as the original reason for their suspension, though that term did not appear in the statement by the principal, who argued the kids are being long-term suspended for their own good:

As the principal of Larkspur Middle School, I am responsible for the safety of students and will take all appropriate actions to ensure that the students using the pellet guns are appropriately disciplined and held responsible for their conduct. It is my sincere hope that they will learn important life lessons; the most important being that there will be consequences when they do things that can result in harm to another person. Given the opportunity, teachers, administrators and our entire community should always be willing to step forward to protect one another. This was a dangerous situation that involved the intervention of law enforcement, the Office of Safety and Loss Control and our school administration. I trust that parents and the public will support our actions which were taken with safety in mind.

Will the public support its actions? The parents of the students involved certainly don't, and the school doesn't appear to be backing away from the decidedly hoplophobic stance that a toy gun is a danger to boys being boys.