What the Syria Crisis Tells Us About the Obama Doctrine, or Lack Thereof

Obama's foreign policy is disengaged, interventionist, and aimless at the same time 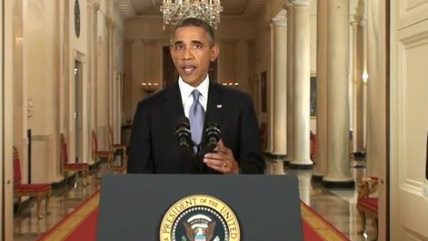 Obama's foreign policy may seem less aggressive than George W. Bush's, but in practice it is just as destructive. For more than two years, Senator John McCain has been pressing for robust military intervention in Syria. Though Obama has avoided getting the U.S. as involved as McCain wants, what passes for Obama's policy toward Syria—calling for Assad to go in 2011, setting and resetting red lines, insisting on supporting and arming the rebels—has the same effect as rushing in head first.

Bush took America into two wars, costing billions of dollars and thousands of lives, with few gains. Today, Iraq is free of Saddam Hussein, but has drifted squarely into Iran's geopolitical orbit. Al Qaeda is nearly non-existent in Afghanistan, but the Taliban is almost as strong as in 2001 and is positioned to take over after the U.S. has left. Obama has avoided any new land wars, although he attempted to postpone the end of the Iraq War and adopted the Bush Administration's "surge" tactic in Afghanistan.

While pressing for military intervention earlier this month, Obama claimed that alleged chemical weapons use by Syria's Assad regime represented a violation of international law that would put U.S. troops at risk in the future. Not only do the relevant international treaties and covenants governing chemical weapons not cover the kind of use that occurred in Syria, the U.S. itself often acts in contravention to such international legal standards.

Seeking at least the perception of international approval for U.S. action is nothing new. President Bush justified the Iraq invasion by pointing to U.N. Security Council resolutions that demanded Saddam Hussein relinquish his weapons of mass destruction. It turns out that Hussein did not have weapons of mass destruction, but feared Iraq's neighbors learning he didn't. He simply didn't believe the U.S. would invade Iraq over the matter.

George W. Bush argued against an interventionist foreign policy in the 2000 elections. After the September 11 attacks, his administration took a decidedly and openly aggressive posture toward any country it believed could threaten U.S. national security by providing weaponry or otherwise supporting terrorist groups intent on attacking the U.S. In hindsight, it should not have been difficult for Hussein to predict that his intransigence toward U.N. inspectors would lead to a U.S. invasion.

Less than a year after the U.S. invaded Iraq over alleged weapons of mass destruction, Libya's Colonel Ghadafi agreed to relinquish his. Ghadafi was able to look at the Bush Administration's words and actions and make a calculated decision on what he should do next. In the end, of course, Ghadafi's WMD gesture and attempt to reintegrate Libya with the rest of the world wasn't enough to prevent him from being a target of regime change.

The 2011 Western intervention in Libya wasn't driven by the U.S., but by its European allies, primarily France, whose president at the time, Nicolas Sarkozy, had a long, complicated relationship with Ghadafi. President Obama didn't go to Congress to authorize U.S. action in Libya nor did he seek its approval or support after the fact. The president also did not articulate the U.S. national security interests in a Libyan intervention. The Europeans believed Ghadafi was going to commit mass slaughter in Benghazi so they pressed the U.S. to help them help Libyan rebel forces. Two years later, the situation is very different.

In Syria's civil war, the casualties may have already surpassed 100,000 dead. The conflict has created two million refugees. Although where Libya had no powerful allies, Syria has Russia (and Iran) in its corner.

Yet on Obama's rhetoric alone, it would be hard to tell the difference between Libya and Syria, or even Egypt. In each case, in the wake of mass protests Obama called for the country's ruler to go. As described in Vali Nasr's Dispensable Nation, Obama's decision to call for Egypt's Mubarak to step down was informed, not by a reading of the situation on the ground, but by a desire to attach himself to an historic moment. Nasr, in fact, writes that almost every foreign policy decision made by President Obama has been dominated by domestic political considerations.

In the run up to intervention in Syria, Obama and members of his cabinet actually pointed to Iran, an ally of Syria's, as a reason to act. In their minds, allowing Syria to possess chemical weapons would send a message to Iran that its nuclear program would be tolerated as well. That argument completely ignored that Iran has a new president who appears at least to be paying lip service to the idea of peacefully resolving the dispute over the country's nuclear program. A spokesperson for the State Department responded by essentially ignoring the gesture of the new Iranian president and declaring that "the ball is in their court" in terms of the nuclear issue. Iran has to resolve the West's concerns about its nuclear program before the U.S. will be a "willing partner."

The Obama Administration appeared intent on military intervention is Syria. When John Kerry proposed that Syria surrender its chemical weapons in order to avoid U.S. military action, it was an off-hand comment at a press conference meant rhetorically. The State Department tried to walk back the Secretary of State's comments, but it was too late. Russia jumped on the opportunity presented to avoid its ally being bombed by the U.S. (a situation which would put Russia in a position of having to consider whether to retaliate and how). Now, Joe Biden is in Iowa campaigning for 2016 by pointing out how Obama was able to avoid a military intervention he himself got the ball rolling on. But, the fact that a diplomatic solution arose from an unscripted remark by Kerry indicates the Obama Administration wasn't serious about trying the diplomatic route before.

As he was finally stepping back from the precipice of war, President Obama even repudiated his own red line. The world set it, he said, not him, even as world opinion was largely against U.S. intervention in Syria. Obama's foreign policy again appeared to be driven not by objectives set by the president, but those set by others. France wanted to bomb Syria, or wanted the U.S. to bomb Syria. Saudi Arabia, a regional opponent of Iran's, wanted the U.S. to bomb Syria, an ally of Iran's. Israel, a threatened neighbor, wanted the U.S. to bomb Syria. What President Obama wanted remains unclear. As he meanders away from the Syria conflict, Obama's foreign policy appears as interventionist and aimless as ever, managing at the same time to avoid engagement with other countries in the region while meddling in their affairs with no apparent purpose.