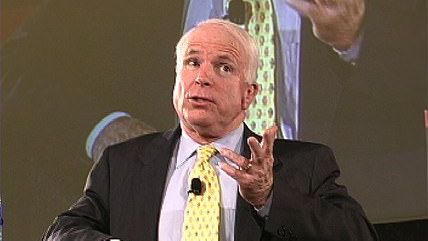 Sen. John McCain is in angry bird mode again. Now he thinks there's some sort of security issue with this open discussion of how the United States might strike Syria. From The Hill:

McCain pointed to reports that say U.S. air strikes on Syria could begin as early as Friday.

The Republican senator, who has long called for more aggressive U.S. action against Syria, said the leaks are tipping the U.S. hand.

"But all of these leaks, when strikes are going to take place, where, what's going to be used, if I were Bashar Assad, I think I would declare tomorrow a snow day and keep everything from work," McCain said on Fox News. "This is crazy. These leaks are just crazy."

One wonders if McCain thinks a public vote to authorize military action against Syria might be "aiding the enemy" at this point. Reuters is reporting today that the citizens in Damascus, you know, those folks we're (allegedly) trying to protect, are hoarding food and looking for safe shelter away from potential military targets. Those are the people for whom this open discussion is likely for. No doubt, the military leadership of Syria has been well-aware for months that a foreign strike was a growing possibility.