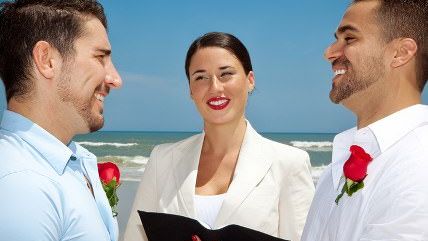 The Supreme Court in New Mexico made official what appeared to be inevitable: It is legal to force somebody who hates you to photograph your wedding. Or, rather, the courts have determined that opposition to same-sex marriage is not a government-approved reason for declining to shoot a gay couple's wedding. From the Associated Press:

Elaine Huguenin, who owns Elane Photography with her husband and is the business's principal photographer, refused to photograph the ceremony because it violated her religious beliefs.

The court held that "a commercial photography business that offers its services to the public, thereby increasing its visibility to potential clients" is bound by the New Mexico Human Rights Act "and must serve same-sex couples on the same basis that it serves opposite-sex couples."

I wrote about the case last summer. Elane Photography has lost every step along the way, so the outcome isn't much of a surprise. The argument on Huguenin's side was that being forced to shoot the wedding violated her rights to free speech and religious expression. The court disagreed, as Huguenin was not being compelled to show actual support for gay marriage, and the judges believed it's unlikely that others would perceive her hired photography as a show of support.

Ken White at Popehat posted the full decision (pdf) for those who want to read it. White makes note of a special concurrence written by Justice Richard C. Bosson, who acknowledges the reality that this decision does have an impact on the Hugueinins' freedom of conscience to some degree and notes that couple is not trying to stop anybody from getting married. They just want the right to be left alone and decide who they can choose to have as customers. After touching on important legal moments in the history of the intersections of religious liberty and law, Bosson concludes:

All of which, I assume, is little comfort to the Huguenins, who now are compelled by law to compromise the very religious beliefs that inspire their lives. Though the rule of law requires it, the result is sobering. It will no doubt leave a tangible mark on the Huguenins and others of similar views.

On a larger scale, this case provokes reflection on what this nation is all about, its promise of fairness, liberty, equality of opportunity, and justice. At its heart, this case teaches that at some point in our lives all of us must compromise, if only a little, to accommodate the contrasting values of others. A multicultural, pluralistic society, one of our nation's strengths, demands no less. The Huguenins are free to think, to say, to believe, as they wish; they may pray to the God of their choice and follow those commandments in their personal lives wherever they lead. The Constitution protects the Huguenins in that respect and much more. But there is a price, one that we all have to pay somewhere in our civic life.

In the smaller, more focused world of the marketplace, of commerce, of public accommodation, the Huguenins have to channel their conduct, not their beliefs, so as to leave space for other Americans who believe something different. That compromise is part of the glue that holds us together as a nation, the tolerance that lubricates the varied moving parts of us as a people. That sense of respect we owe others, whether or not we believe as they do, illuminates this country, setting it apart from the discord that afflicts much of the rest of the world. In short, I would say to the Huguenins, with the utmost respect: it is the price of citizenship. I therefore concur.

White blogged about the decision in the context of asking why there are some who are outraged when laws force businesses to serve gays but are not equally outraged about laws that force businesses to serve all races or the other categories associated with public accommodations. A Rasmussen Poll from July indicated that 85 percent agree that the Huguenins' have the right to refuse to shoot gay weddings. That number is interesting, in that it means there's a significant number who support recognizing gay marriage but nevertheless feel photographers shouldn't be required to shoot the wedding.

I would suggest maybe White is caught up in looking at the wrong categories. I think the answer lies in not what or who the law protects but rather what the law counts as a "public accommodation" versus what the individual perceives as a "public accommodation." Does anybody have a right to a wedding photographer? If the poll question had simply asked "Can a paid photographer refuse to shoot a wedding for any reason?" and left it at that, what would the numbers be? Would the public differentiate between bigoted reasons versus other considerations?

Sticking to gay marriage, what if we changed what was asked? "Could a doctor refuse to provide medical treatment to a gay couple?" "Could an attorney refuse to represent a gay couple in a lawsuit?" "Could a supermarket refuse to let a gay couple shop there?" The responses to each question may vary not just because of a person's attitude toward gays and lesbians, but also by their attitude of what counts as a "public accommodation." People need food and medical care to live. Wedding pictures, not so much.

Even so, there's still a very fundamental issue that still does not seem to get answered in these conflicts over discrimination and consumption and employment and other private situations: Does the existence of discriminatory behavior, even severely bigoted behavior, necessarily require government intervention to resolve? As I noted when I wrote about this case last year, the plaintiffs had other options that were even directly marketing themselves to same-sex couples. Bosson states, "In the smaller, more focused world of the marketplace, of commerce, of public accommodation, the Huguenins have to channel their conduct, not their beliefs, so as to leave space for other Americans who believe something different."

The mistake here is thinking that the world of the marketplace and commerce is smaller than our society as a whole. It's not. The marketplace is not a subset of society. A Venn diagram is insufficient to show the relationship. Imagine two parallel planes in a space with a constant immeasurable interactions between them. Bosson assumes that if the Huguenins aren't required by the government to "leave space" for these gay couples, then there will be no other solutions forthcoming that will get these couples what they want. There is a significant amount of marketplace evidence that suggests otherwise.