LAUSD and charter program split grades in an unusual experiment 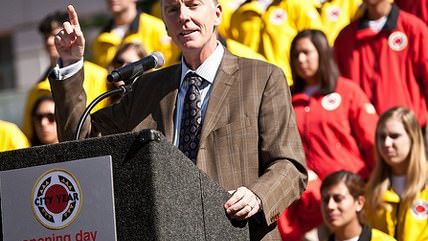 At the end of July, the first parent-triggered transformation of a public school to a charter program began its experiment, as Desert Trails Elementary (now Desert Trails Preparatory Academy) re-opened its doors in Adelanto, Calif.

This week, another somewhat different parent-triggered public school change was implemented at 24th Street Elementary in Los Angeles. Parents, the school district, and a charter program all decided to work together for a hybrid model. The school district will still manage the education of students up to fourth grade. Then a charter program, Crown Preparatory Academy, will manage education from fifth through eighth grade. Via the Los Angeles Times:

Parents, upset with what they saw as inept leadership and subpar teaching, overwhelmingly voted for the joint effort. Of those eligible to cast ballots, 80% chose the district-charter option over seven other proposals.

"It makes me feel like we're doing the right thing at the school," the superintendent said after visiting the campus early Tuesday morning.

The school district substantially restaffed the campus, brought in a new principal and has made efforts to reach out to the community.

Only five teachers from last year returned to the school after going through an application process. The rest of the teachers were recruited from charter operators, other districts and university teaching programs, according to the district.

The school is now called the 24th Street Learning Center.

Deasy has been battling the teachers' union over having performance evaluations that actually evaluate teacher performance with crazy ideas like, you know, measurable outcomes. As the union resists, it's easy to imagine his encouragement of this experiment as a warning: Bad teachers can be gotten rid of, if the parents get organized.

One additional detail about parent-triggered charter school transitions to bring up. One of the criticisms of charter school programs is similar to what people say about private schools – the successful ones are often dismissed by pointing out they get to "choose" their students through an application process.

There's a big difference, though, with charter schools that are forced by parent-trigger petitions. According to the federal guidelines California's parent-trigger law looks to for implementation (under the Obama Administration's Race to the Top program), the charter school must accept any former students who want to attend. A charter school can't just take over and refuse to let the poorer performing students back. So this experiment is particularly useful at analyzing whether charter schools can perform as well or better than public schools given the same students.