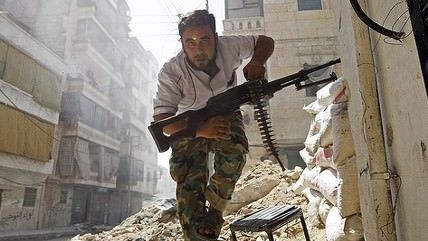 According to reporting from The New York Times European and American intelligence officials believe there are more radical western Muslims fighting in Syria than there were in conflicts in Yemen, Somalia, Iraq, and Afghanistan, raising concerns that once the Syrian civil war is is over some will return to carry out attacks in the U.S. and Europe.

Most of the Westerners are self-radicalized and are traveling on their own initiative to Turkey, where rebel facilitators often link them up with specific groups, terrorism experts say. Many have joined ranks with the Qaeda-aligned Nusra Front, which American officials have designated as a terrorist group.

"The scale of this is completely different from what we've experienced in the past," Gilles de Kerchove, the European Union's counterterrorism coordinator, said at the conference in Aspen.

Many of these radical western Muslims end up in the ranks of Jabhat al-Nusra, an Al Qaeda-linked jihadist group. This should be particularly worrying to western intelligence agencies and officials because the Obama administration is preparing to send weapons to some of Assad's opposition. Of course American officials do not want radical western Islamists to get a hold of American weapons, but given the situation in Syria it is impossible to guarantee that jihadists will not get American weapons.

Last month I wrote about a study released by Flashpoint Partners on the foreign Sunni rebels fighting in Syria. It is a scary but interesting illustration of how diverse the conflict in Syria is and the sorts of people we don't want to see with American military equipment.