Why Spy on Everybody? Because "You Need the Haystack To Find the Needle," Says NSA Chief 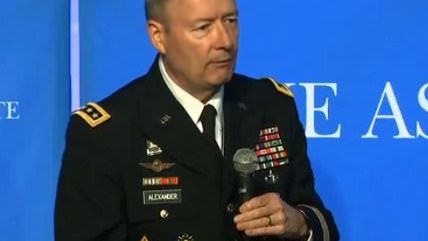 Interviewed in front of an audience at the Aspen Security Forum by NBC's Pete Wlliams, General Keith Alexander, Director of the National Security Agency, echoed the old (two) party line that everything changed after the terrorist attacks of 9/11, and that's why the US government needs to set the National Security Agency to tracking everybody's communications. And, as you might guess he'd say, keeping all of that snooping hidden is for our own good.

And what Edward Snowden did in exposing the snooping is very bad, indeed.

We have concrete proof that … terrorist groups and others are taking actions, making changes, and it's going to make our job tougher.

But Alexander hastened to assure his audience that the NSA would be overwhelmed by the task of actually perusing all of those communications it intercepts, even if it wanted to.

If you think that we would listen to everybody's telephone calls and read everybody's emails to connect the dots, How do you do that? And the answer is, that's not logical. That would be a waste of our resources to get there.

This is why, he says, the NSA focuses on metadata: who we're contacting, how frequently and for how long. That lets it pick and choose whose communications are then worthy of further scrutiny (though he insists that the FBI would do the scrutinizing for purely domestic communications, and then only after a warrant). But the snoops can only identify the emails they really want to see and the phone calls they really want to listen to, if they have all of thet metadata to scan, as a sort of table of contents to the world's chatter. As he put it, "you need the haystack to find the needle."

But there's a huge "trust us" element to Alexander's argument. The implicit assumption is that there"s no threat in letting government officials know who we're communicating with, even if our contacts include foreign opponents of regimes favored by our government, domestic political activists, candidates running against American politicians, journalists communicating with whistleblowers…

We're supposed to trust the NSA and any other officials with access to this data to maintain the same definitions of "needle" and "haystack" that all the rest of us might respect, and to thoroughly abide by that differentiation.

That's a lot to ask.

The Aspen Times has more coverage of the speech here.