Will NBA superstar LeBron James be a spokesman for Obamacare? 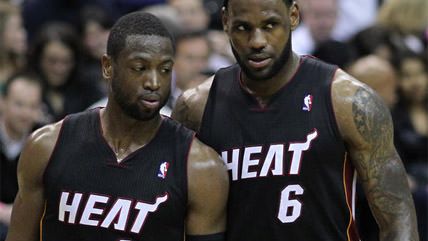 White House officials have approached the NBA about potentially using the Heat's superstar-baller LeBron James and other basketball stars to promote a yet unpopular Affordable Care Act, according to Politico.

"The NBA season's calendar tracks closely with the six-month period during whichAmericans have a chance to sign up for subsidized insurance around the country – beginning on Oct. 1. And NBA fans fit key demographics targeted by supporters of the health law," Politico reported.

Florida Watchdog contacted the NBA, but did not receive a response. Agents for James could not be reached.

"We are having active discussions with a variety of sports affiliates with paid advertising and partnerships," Kathleen Sebelius, Secretary of the U.S. Department of Health and Human Services, told reporters.

What's behind the government-led advertising blitz? The pressure to turn public opinion and enroll the initially projected 7 million to 8 million participants in the all-important state insurance exchanges before the deadline on March 31, 2014 — a tall order.

Four major polls conducted during the past month show double-digit disapproval ratings for the federal health care law, and a recent Kaiser Family Foundation survey found 77 percent of respondents knew very little or nothing at all about the exchanges.

For the law to work, millions of young, healthy Americans must enroll in the exchanges to balance higher insurance risks associated with older and less healthy participants.

To combat the problem, the Obama administration is employing a Madison Avenue-like approach that will be paid for with health-related funding, as opposed to congressional appropriation.

Much of the health care law was designed to give the secretary of HHS discretion over the law's implementation, and in light of Obamacare's unpopularity, Sebelius is using a sizable chunk of a program known as the Prevention and Public Health Fund for Obamacare's marketing.

The Prevention Fund is a multi-billion dollar component of the ACA that is supposed to "improve health and help restrain the rate of growth in private and public sector health care costs."

Ironically, almost half of this year's $1 billion Prevention Fund budget will be used for "health insurance enrollment support," which includes "activities to make people aware of insurance options."

The administration's use of health-related funding for Obamacare promotional activities has led to harsh criticism by none other than the author of the Prevention and Public Health Fund.

In a Senate floor speech in May, U.S. Sen. Tom Harkin (D-Iowa) a staunch health-reform advocate, stressed the importance of the Prevention Fund's mission to save lives and money, and expressed "disappointment regarding the Administration's decision to raid the critical fund."

"Mr. President, I was deeply disturbed, several weeks ago, to learn of the White House's plan to strip $332 million (now $454 million) in critical funding from the Prevention and Public Health Fund and to redirect that money to educating the public about the new health insurance marketplaces and other aspects of implementing the Affordable Care Act," Harkin said.

"Not only is this a case of misplaced priorities, but it is, frankly, an outrageous attack on an investment fund that is saving lives by advancing wellness and prevention initiatives in communities all across America," he said.

In the two years following the approval of the Affordable Care Act, HHS awarded Florida only $34.8 million in Prevention Funds.

This article originally appeared on Watchdog.org.