What Could the Protests In Egypt Result In? 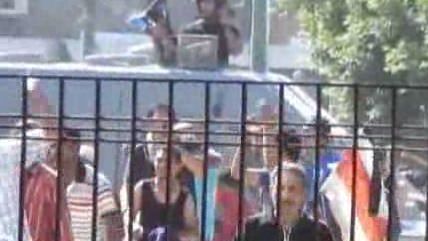 Egypt erupted in protest over the weekend, on the one year anniversary of Mohammed Morsi's inauguration as president. The headquarters of the Muslim Brotherhood, with which Morsi is affiliated, were stormed this morning, although no one was left in the building. Nineteen people died in the demonstrations yesterday and pro-Morsi clerics warned tensions could lead to civil war. The army, on the other hand, has threatened to intervene on behalf of the opposition. Similar protests in 2011 helped topple Hosni Mubarak, the longtime Egyptian strongman. Egypt's first democratically-held elections concluded with the election of Morsi in the second round. Protests previously erupted in Egypt late last year over the Muslim Brotherhood's effort to push through an Islamist constitution that enshrined the president with what many considered too much power. Those protests were unsuccessful, and the constitution was approved at the polls.

There have been large-scale protests for several weeks too in the more democratic Brazil. In that country, the president Dilma Rousseff promised her government was listening to protesters, though that did little to alleviate a protest that started about bus fares but became a wider complaint about corruption and government spending on the 2014 World Cup and 2016 Olympics.

The Brazilian economist Rodrigo Constantino last week explained in an op-ed for O Globo, a Rio newspaper, why he, a self-described (classic) liberal, was not optimistic about what the protests might accomplish. Via Google's machine translation*:

I am very critical of this government. My judgment was PT [the ruling Worker's Party] is the worst possible. Never before in the history of this country have so many blunders joint, so incompetent, so much mediocrity and naughtiness. The PT segregated the country, bought votes with handouts… and demonstrates strong authoritarian bias.

We are paying a high price for this ineffectiveness, now that the external winds stopped blowing in our direction. Dilma has not made a single major structural reform, overplayed populism and allowed even the return of high inflation. My verdict is as hard as possible against the president and her team.

That said, I can not dive with a lot of optimism in the demonstrations in the streets, because I have serious doubts whether this is also the diagnosis of these people. Many people end up demanding more state intervention as a solution. Want more poison! …This definitely is not the way.

The demand that the solution to corrupt or ineffective government should be more government is not exclusive seen Brazil. We saw similar inclinations arise in protests at Occupy Wall Street and around the world.

Constantino ends with a suggestion to his fellow Brazilian that works just as well for the Egyptians who flooded the streets in protest this weekend and even the ongoing protests in Turkey:

Be outraged, but in the polls! Not be the ideal choice, but the ideal exists only in our illusions. And they are dangerous when we believe that they are viable. Let us do what we can, keeping our fragile but necessary democracy. No use to roar like a lion in the streets and then vote like a donkey in the polls.

As George W. Bush said, fool me once, shame on you, fool me twice, won't get fooled again! Buyer's remorse may be a feature of democracy, but it ought to be one that informs better choices in the future, be it felt by Brazilians, Egyptians, Turks, or even Americans.

*You can suggest better translations of the original in the comments!