Rand Paul Responds to Obama on Drones: Power Point Presentations May Not Represent Due Process 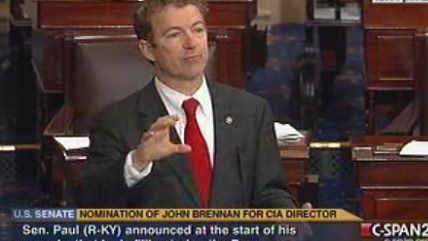 Rand Paul, who led a thirteen hour filibuster of the nomination of John Brennan to head the CIA over the issue of drones targeting Americans, responded today to the president's most detailed comments on U.S. drone policy so far in his administration. Paul's response, in full:

"I'm glad the President finally acknowledged that American citizens deserve some form of due process. But I still have concerns over whether flash cards and PowerPoint presentations represent due process; my preference would be to try accused U.S. citizens for treason in a court of law."

Last year, the New York Times described in some detail the "internal deliberations" that pass for due process in the drone campaign waged by the White House. Al-Awlaki, the only American killed in a drone strike the president actually mentioned today, was never even indicted in a U.S. court.