There's more to this American subculture than you think. 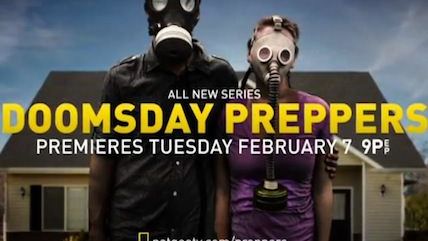 My friend Ceredwyn Alexander lives on a homestead in the mountains of Vermont. Her family raises a lot of their own food, from chickens to cabbage, and they heat their home with wood they chop themselves. They worry about peak oil. They try not to buy things on credit. They keep a great deal of food and water and other supplies on hand. If everything goes to hell tomorrow, they want to be prepared.

People who say and do such things are often called preppers, and Ceredwyn willingly applies the term to herself: It's a decent label, she says, for people who try to be prepared for sudden, disruptive emergencies. If you've been absorbing the recent portraits of preppers in the press, where they've been depicted as doomsday-fearing right-wing paranoiacs stocking up on guns and canned goods, you may think you know all there is to know about Ceredwyn. But before you use your stock of stereotypes to fill in those blanks, here are a few more facts about her.

Her politics are liberal and feminist. Her family's firearm collection consists of a single shotgun, which they own in case a four-legged predator passes through. She speaks disdainfully about survivalists who spend their time "waiting for the Mutant Zombie Bikers to come take their guns, drugs, and women away." Ask her about survival strategies, and she doesn't start spinning fantasies about a well-provisioned family fending off looters. "When the shit hit the fan during Irene," she says instead, "neighbors were everyone's best resource." Preparedness, she adds, requires "learning skills and community involvement…not freeze dried food and razor wire." To those ends, she has joined the volunteer fire department and become the town service officer.

As far as the mass media are concerned, America's preeminent preppers are the Alabama kidnapper Jimmy Lee Dykes; Nancy Lanza, whose son raided her gun collection before he carried out the Sandy Hook massacre; and the people who appear on the National Geographic TV show Doomsday Preppers, who might charitably be described as "colorful." Dykes "is described by neighbors as 'very paranoid,' anti-government and possibly a 'Doomsday prepper,'?" the New York Daily News reported. The London Independent called Lanza a "so-called 'prepper,' a part of the survivalist movement which urges individuals to prepare for the breakdown of society by training with weapons and hoarding food and other supplies."

When the liberal historian Rick Perlstein wrote about preppers in The Nation this year, he headlined his essay "Nothing New Under the Wingnut Sun: 'Survivalism.'" After invoking Dykes and Lanza in his lead, he talked about the right-wing survivalists of the 1960s, '70s, and '80s, linking them to the preppers of the present by describing the lot of them as "Americans who fear change, fear difference, fear you and me, fear everything falling apart. So much so that they organize their lives and politics around staving off the fear—which often entails taking political action that only makes America more fearful and dangerous for everyone; which destroy the trust and love it takes to sustain communities." (Speaking of fears about people who are different.)

In fact, the prepper community includes a lot of political and cultural variety. If there is right-wing survivalist DNA here, there is also the DNA of the Whole Earth Catalog and several generations of bohemian back-to-the-landers, plus a fair number of families whose inspiration isn't much larger than the Boy Scout motto, "Be Prepared." Tour the online prepper communities, and you may run into people who have embraced the long-lived conspiracy yarn in which the Federal Emergency Management Agency (FEMA) is plotting to put us in concentration camps. You may also encounter FEMA itself, which currently has an advertisement on the front page of the American Preppers Network. The ad asks, "Do you meet President Obama's minimum Prepper Standards?"

There may be even more diversity in the scenarios these people are preparing for. Ceredwyn got her family on board with her prepperdom about 12 years ago, when an ice storm hit their then-home in Shreveport. "We were out of power for 10 days," she recalls. "No heat, no water, no stove, no phone.…Could have been completely awful, but we had everything we needed, including a propane heater and stove I bought." Her own interest in preparedness began earlier, when she was working for an abortion clinic: "Nothing like being the possible victim of terrorism to get the survivalist juices flowing," she recalls. Or maybe it was even earlier than that: In an essay for her blog, she writes about her parents' divorce. Her dad drained the family savings accounts on his way out, and "in short order, we went from the sort of people who gave to charity, to being the sort of people who had to choose between eating and paying the light bill.…I am left with a fear of empty cupboards and a clear understanding that, at any moment, the bottom could drop out of my world."

Disasters, she concludes, come in all shapes and sizes, and they strike people every day. "People talk about collapse as though it's in the far off future, and as if it will hit everyone, everywhere, at the same moment," she writes. "Many, many people are already living in a state of collapse. It doesn't matter if the rest of the world is going merrily on when you've been evicted, your kids are hungry, you have an infected tooth you can't take care of, and you're trying not to let anyone know the family's been sleeping in the minivan." It's a class-conscious take on poverty, disabilities, and other issues that might not come up much on Doomsday Preppers but obviously aren't absent from preppers' minds. When the American Preppers Network lists problems to prepare for, it explicitly includes "the loss or major injury of a breadwinner, loss of a primary job, extended sickness, accidents and other personal calamities."

It's important to push back when a subculture gets scapegoated, whether it's goths after Columbine or preppers today. It's especially important when those attacks are embedded in our political debates. Today the gun owner is often envisioned as a prepper, the prepper as a frightened survivalist. Neither real-world gun owners nor real-world preppers are well served by such stereotypes. And neither is anyone who wants an accurate image of the world.