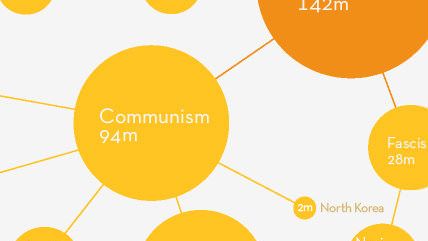 According to a disturbingly pleasant graphic from Information is Beautiful entitled simply 20th Century Death, communism was the leading ideological cause of death between 1900 and 2000. The 94 million that perished in China, the Soviet Union, North Korea, Afghanistan, and Eastern Europe easily (and tragically) trump the 28 million that died under fascist regimes during the same period.

During the century measured, more people died as a result of communism than from homicide (58 million) and genocide (30 million) put together. The combined death tolls of WWI (37 million) and WWII (66 million) exceed communism's total by only 9 million.

It gets worse when you look at the lower right of the chart—The Natural World—which includes animals (7 million), natural disasters (24 million), and famine (101 million). Curiously, all of the world's worst famines during the 20th century were in communist countries: China (twice!), the Soviet Union, and North Korea.

Communism is a killer. And yet some still say they support the idea: According to a 2011 Rasmussen poll, 11% of Americans think that communism would better serve this country's needs than our current system.