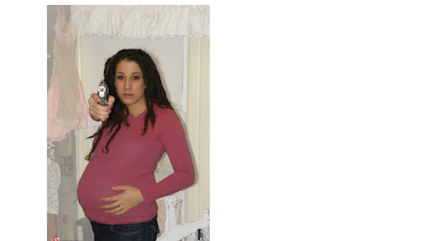 Original post: What if I told you police in your town could desensitize themselves to the idea of shooting a (armed) child, pregnant woman, or young mother, for just a couple of bucks? The "No More Hesitation" series from Law Enforcement Targets Inc. offers exactly that. For less than 99 cents per target, police can shoot at real-life images "designed to give officers the experience of dealing with deadly force shooting scenarios with subjects that are not the norm during training."

The marketing team at Law Enforcement Targets, Inc. sends along this helpful explanation for the "No More Hesitation" series:

"The subjects in NMH targets were chosen in order to give officers the experience of dealing with deadly force shooting scenarios with subjects that are not the norm during training. I found while speaking with officers and trainers in the law enforcement community that there is a hesitation on the part of cops when deadly force is required on subjects with atypical age, frailty or condition (one officer explaining that he enlarged photos of his own kids to use as targets so that he would not be caught off guard with such a drastically new experience while on duty). This hesitation time may be only seconds but that is not acceptable when officers are losing their lives in these same situations. The goal of NMH is to break that stereotype on the range, regardless of how slim the chances are of encountering a real life scenario that involves a child, pregnant woman, etc. If that initial hesitation time can be cut down due to range experience, the officer and community are better served."

I've reached out to Minnesota-based Law Enforcement Targets, Inc., for comment on what inspired the series and whether it's popular with law enforcement groups (see comment added above). Considering that the company has landed $5.5 million worth of contracts with the federal government, it might also be interesting to know if these targets are being used by federal law enforcement agents.