When it comes to defense, Republicans think government spending boosts the economy. 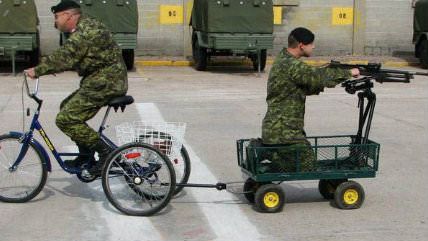 In September, Mitt Romney launched a series of TV commercials promising to protect and create jobs by preventing the military spending cuts mandated in a bipartisan 2011 deficit reduction agreement. "Here in Virginia," one ad says, "we're not better off under President Obama. His defense cuts threaten over 130,000 jobs—lowering home values, putting families at risk."

It's an article of faith among modern Democrats that employment and the overall economy depend on government spending. Although Republicans supposedly reject that premise, they make an exception in the case of military spending.

George Mason University analyst Stephen Fuller gave the Republican argument a boost with an October 2011 study commissioned by the Aerospace Industries Association. Fuller concluded that the scheduled $45 billion cut in military procurement for fiscal year 2013 would reduce GDP by $86 billion that year and eliminate more than 1 million jobs. Virginia and California each would stand to lose more than 100,000 jobs, he estimated.

It is difficult to overstate the impact that Fuller's predictions had on the defense industry. But his analysis is deeply flawed, a fact that has been conveniently ignored by opportunistic politicians and journalists in search of the next economic scare story.

The most critical mistake in Fuller's analysis is his claim that when the government cuts defense spending by $1, the economy will shrink by $1.92—and vice versa when spending increases. The reality is that economists have been debating returns on government spending for years without reaching anything like a consensus. Some studies find large positive multipliers (every dollar in federal spending means more than a dollar of economic growth), but others find negative multipliers (every federal dollar spent hurts the economy).

The multiplier Fuller uses depends on data taken from historical situations or model assumptions that do not resemble our own. For instance, we are not currently engaged in an all-consuming war effort (as we were during World War II), we are not technically in a recession (as we were two years ago), and our unemployment rates are high, but not as high as they have been during other times. In theory, high unemployment rates make government spending more potent since it allows the use of resources that would otherwise be idle. Basically, the idea is that government spending will be used to hire workers who would otherwise be unemployed.

More fundamentally, Fuller's analysis fails to consider the impact that massive, ongoing Pentagon spending has on the economy. In a forthcoming paper to be published in The Review of Austrian Economics, George Mason University economists Chris Coyne and Thomas Duncan argue that the permanent war economy—military spending now consumes roughly 20 percent of our budget, at a cost of over $700 billion including war spending—draws resources into the military sector at the expense of the private economy, even in times of peace. They find that the huge defense budget undermines market processes and decreases our standard of living.

Academic studies corroborate the claim that government spending can reduce private-sector activity. A 2011 National Bureau of Economic Research (NBER) working paper by Lauren Cohen, Joshua Coval, and Christopher Malloy of the Harvard Business School finds that federal spending causes local businesses to scale back their employment, which causes declines in sales rather than growth. In other words, when government spending grows, the private sector shrinks as normal economic activity is crowded out.

University of California at San Diego economist Valerie Ramey reviews the literature on the impact of government spending in a January 2012 NBER paper. "No matter which identification scheme or which sample period was used," she reports, "an increase in government spending didn't lead to an increase in private sector spending. In most cases, it led to significant decreases."

That holds true for Pentagon spending. Like any investment of time or money, military spending is subject to decreasing marginal returns. Since national defense is a public good, creating a system for protecting the nation is economically beneficial. Beyond a certain amount, however, increased government spending crowds out private-sector investments of greater value.

In a 2012 study published by the Cato Institute, Benjamin Zycher of the American Enterprise Institute reminds us that even in the worst-case scenario, in which defense jobs are lost, this reduction does not necessarily represent a net loss to the economy. The newly unemployed person feels pain, of course, but the resources freed up in the process may yield higher returns elsewhere.

Studies that consider the additional tax levies needed tomorrow to pay for today's spending find that government outlays can have a serious negative impact on the economy, even in the case of defense spending or other legitimate government functions. For instance, the Harvard economists Robert Barro and Charles Redlick found in a 2011 study called "Macroeconomic Effects from Government Purchases and Taxes" that the tax multiplier—the effect that tax increases have on GDP—is slightly negative. If the government raises taxes by $1, they estimate, the economy will shrink by $1.10. When this tax multiplier is combined with the effects of the spending multiplier, the overall effect is even more negative. These findings also imply that if a reduction in defense spending leads to future tax cuts, the economy will benefit.

Looking at different types of military spending than Fuller, the work of Mark A. Hooker and Michael M. Knetter, the current president and CEO of the University of Wisconsin Foundation, shows that some defense cuts may even have no negative impact on the economy, even in the short run. In a 1999 study published by NBER, Hooker and Knetter looked at the 25 percent reduction in real defense spending during the 1990s, particularly the economic consequences of closing 57 military bases, which resulted in job losses ranging from 150 to more than 16,000. Comparing employment in counties where bases closed to employment in counties where they remained open the authors found that "in most cases, job losses didn't spill over from the base to other sectors in the economy as is typically assumed in impact analyses." Instead, "jobs were created in particular when [a] base's resources could be deployed in alternative uses."

The employment reductions in the affected counties were limited to the jobs at the bases. But these direct losses didn't mean a net reduction in employment, since in most cases the closures resulted in transfers or reallocations of military personnel out of the region.

As we head into the budget battles of 2013, it's important to remember that the GOP's military Keynesianism is no more academically sound than the broader version preferred by Democrats. Until both sides repudiate faith-based economics, we will be stuck with excessive government spending.