The Obama administration's shoddy response to the consulate attack in Libya

Matt Welch | From the December 2012 issue 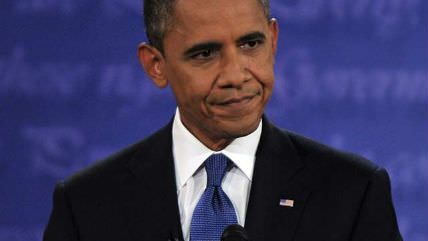 On the 11th anniversary of the September 11 attacks, scores of men armed with rocket propellers, hand grenades, and automatic rifles assaulted two separate U.S. diplomatic buildings in Benghazi, Libya, for more than four hours, killing Ambassador Christopher Stevens and three other Americans. Despite clear evidence of planning and the symbolism of September 11, officials in Barack Obama's White House spent the next week blaming the attacks on a crude, straight-to-YouTube trailer for an anti-Islam movie called Innocence of Muslims, made by an ex-convict living in Cerritos, California.

"What sparked the recent violence was the airing on the Internet of a very hateful, very offensive video that has offended very many people around the world," the U.S. ambassador to the United Nations, Susan Rice, said September 16 on Fox News Sunday. "It began spontaneously in Benghazi, as a reaction to what had transpired some hours earlier in Cairo," Rice asserted on ABC's This Week that same day, "where, of course, as you know, there was a violent protest outside of our embassy sparked by this hateful video."

Most of Rice's claims were soon debunked. CBS News reported September 20 that there had been no spontaneous demonstration outside the consulate in Benghazi. Reuters, The Daily Beast, and other outlets followed up with reports that the day after the attack the administration already had good intelligence indicating that it was a planned, foreshadowed assault by militants connected to Al Qaeda.

Even more damaging than the White House's blame-shifting spin was the notion, reinforced by President Obama, that a single piece of bad art in California could "spark" violence in more than 20 countries. It's an inapt metaphor, giving the mistaken impression that the arsonist is not the one lighting the match but rather the one who allegedly makes the pyromaniac angry. Such confusion of responsibility is materially eroding our ability to speak freely, while providing an incentive for those who wish to attack us into silence.

As mobs of angry Muslims headed toward U.S. diplomatic missions in Cairo and elsewhere on September 11, one of the State Department's first responses was to serially condemn Innocence of Muslims, the trailer for which had been plucked out of months-long Internet obscurity by an Egyptian television personality the week before. The U.S. embassy in Cairo released a statement accusing the film of "religious incitement," adding, "We firmly reject the actions by those who abuse the universal right of free speech to hurt the religious beliefs of others."

This self-defense through pre-emptive film criticism did not work. Within hours the embassy had been sacked by rioters who chanted "Obama! Obama! We are all Osama!" and pulled down the American flag, replacing it with a black banner carrying the inscription, "There is no god but Allah and Muhammad is his prophet." Protest organizer Mohammed al-Zawahiri, the brother of Al Qaeda leader Ayman al-Zawahiri, proclaimed that nothing short of putting the filmmakers on trial would be acceptable.

Interestingly, al-Zawahiri is getting his wish. Innocence of Muslims auteur Nakoula Basseley Nakoula, a shadowy figure with a long rap sheet and a history of using aliases (such as "Sam Becile," for the purpose of this film), was taken into custody by federal probation officers and local sheriff's deputies on September 15 in a heavily photographed show of force, then charged on September 27 with eight counts of violating probation. At press time Nakoula, who faces a maximum sentence of two years, was being held in protective custody without bail.

Even if the federal case against Nakoula is completely legitimate and consistent with probation violation situations that don't involve global riots, the Obama administration took a further step to squelch his free expression by asking YouTube on September 11 to check whether the video violated company rules against "hate speech." YouTube decided to keep the video up, although it did remove the trailer from its sites in Egypt and Libya, a development that the Associated Press announced under the tendentious headline "YouTube Blocks Video Inciting Violence."

There is a crucial legal distinction between incitement—the accusation leveled by A.P., the U.S. embassy in Cairo, and a host of other commentators against Nakoula—and provocation. The latter is a constitutionally protected attempt to outrage people, while the former can in some situations be illegal. According to the 1969 Supreme Court case Brandenburg v. Ohio, the government may punish the advocacy of violence only when it is both intended and likely to result in "imminent lawless action."

Even though Innocence of Muslims does not advocate violence, imminent or otherwise, that has not stopped some people from treating Nakoula's speech as a potentially criminal act. The Carnegie Endowment's Sarah Chayes, a former special assistant to the chairman of the U.S. Joint Chiefs of Staff, argued in a September 18 Los Angeles Times op-ed piece that the film might meet Brandenburg's "imminence" standard because it "was deliberately publicized just before the sensitive date of September 11, and could be expected to spark violence on that anniversary."

This was not an isolated academic attack on free speech in the wake of the embassy riots. University of Pennsylvania religious studies professor Anthea Butler wrote in USA Today on September 12 that Nakoula should be arrested because his video "denigrates" Islam "by depicting the faith's founder in several ludicrous and historically inaccurate scenes to incite and inflame viewers." (Radio commentator Bill Press went even further, arguing that the filmmakers "are as guilty as the terrorists who carried out those attacks against our embassy in Libya.") University of Chicago law professor Eric Posner wrote in Slate that "the vile anti-Muslim video shows that the U.S. overvalues free speech."

If anything, the official U.S. reaction has boosted the value of attacks against American free expression. Hassan Sanei, the head of Iran's state-run institute 15 Khordad raised the bounty on novelist Salman Rushdie's head by $500,000, to $3.3 million, on September 16. In Pakistan, a country that receives more than $1 billion in U.S. aid per year, a government minister offered a $100,000 bounty for the "noble cause" of murdering the men behind Innocence of Muslims.

How did the White House respond to this bloodthirsty affront? "The President and Secretary of State have both said the video at the core of this is offensive, disgusting, and reprehensible," the State Department said, "but that is no justification for violence, and it is important for responsible leaders to stand up and speak out against violence."

The rioters busy trying to kill Americans want the U.S. government to single out the makers of a trashy video for criticism and even prosecution. Amazingly, Washington has complied at every turn, instead of forthrightly explaining our constitutional value of free speech.

President Obama belatedly attempted to fix that oversight in a September 25 speech to the United Nations. "The strongest weapon against hateful speech is not repression," he said. "It is more speech." He added that "there's no video that justifies an attack on an embassy."

But the president bracketed these important points by telling the world how it "must" respond to hurtful speech. "I believe [the video's] message must be rejected by all who respect our common humanity," he said. "The future must not belong to those who slander the prophet of Islam. Yet to be credible, those who condemn that slander must also condemn the hate we see when the image of Jesus Christ is desecrated, churches are destroyed, or the Holocaust is denied."

This mandate to take offense is a recipe not just for the kind of self-censorship Americans already engage in when discussing the historical figure of Muhammad, but also the kind of active censorship that America's critics, and too many of its academics, are recommending. If Obama ends up serving only one term, his treatment of the Libya attacks and the First Amendment will be an inglorious coda on a failed presidency.