Over at mises.org, Michele Boldrin and David K. Levine challenge the standard story of James Watt and the steam engine. Their conclusion: 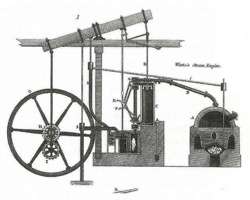