The revised edition addresses several new issues including arguments that migration must be restricted to curtail the spread of dangerous diseases, such as Covid-19, claims that immigration might generate a political backlash that threatens democracy, and the impact of remote work on foot voting. 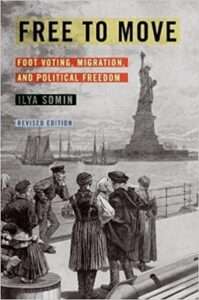 The revised edition incorporates these two issues and more besides. Among other things, I also address the claim that too much immigration might generate a dangerous nativist backlash, which in turn could even threaten liberal democracy. This idea—which I really should have included in the original edition—is distinct from the argument that immigration threatens liberal institutions because immigrants themselves might turn out to be terrible voters who support illiberal politicians and parties. The latter issue was already extensively addressed in the original edition, and I have a added a few points related to it in this one.

The new edition also includes a number of other smaller additions and improvements, such as consideration of the issue of extraterritorial taxation—a problem that caught my attention because Yale Law School Prof. Jack Balkin raised it in an interview with me. Its importance was further highlighted by the abortive case of New Hampshire v. Massachusetts, which I think might be a harbinger of things to come.

"It is the best book on geographic mobility and exit that has been written to date, and… I am happy to recommend it heartily."—Tyler Cowen, Marginal Revolution

"In this excellent book, Somin makes a compelling case that migration — or foot voting — provides far more political power than voting. Any one voter has a trivially small chance of altering an election, but any household can choose a new state and local government by simply moving. This insight implies that devolving power to local governments will generate far more political voice than any conceivable reform to national elections. Freer international migration would empower even more people to choose their own government. Somin's case is strong, his thinking is clear, and his writing is eloquent."—Edward Glaeser, Fred and Eleanor Glimp Professor of Economics, Harvard University and author of The Triumph of the City

"Ilya Somin shows that mobility-the freedom to move from here to there-might be the most underrated underpinning of a free society. It is especially important in America, where states can compete with one another to have social policies welcoming to enterprise and liberty. Voting is important; so is what Somin calls 'foot voting.'"–George F. Will, columnist, Washington Post, and author of The Conservative Sensibility

"Free to Move shows that foot voting works better than we think, is more common than we think, and that there are many opportunities to improve political freedom by encouraging foot voting…. Chapter 5…. convincingly rejects both individualistic and communitarian arguments that self-determination can justify the exclusion of people. It offers as clear and convincing a rejection of discrimination based on parentage and place of birth as this author has ever seen… One of the outstanding features of the book is that it is robust to criticism. The reason is that Somin deals with potential critiques in a fair way. There are no straw person arguments." — Ilia Murtazashvili, Public Choice

"Ilya Somin's book is terrific."—Guy-Uriel Charles, Law professor at Duke Law School and the co-director of the Center on Law, Race, and Politics, Twitter

"Somin offers a compelling and ingenious justification for free global movement … The book's combination of rigorous thought and engaging argument makes "Free to Move" a must-read for those interested in the future of immigration law and policy."—Peter Margulies, Lawfare