The Times doesn't even pay attention to its own reporting when it doesn't suit the narrative, in this case that until this month, recent antisemitic violence was largely a Trump-related phenomenon.


Back in January, I wrote, "I can't say I've ever fully trusted the Times to be accurate, but until recently I generally felt fairly confident that even if a story was slanted in perspective, the facts that were reported were basically accurate. Not anymore."

Here's another example, from a story on the recent wave of antisemitic violence. 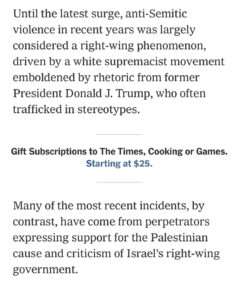 Three things of note. First, while the most infamous incidents of antisemitic violence in the U.S. in recent years were the Pittsburgh and Poway synagogue shootings by white supremacists, the bulk of recent antisemitic violent incidents were a series of dozens of attacks on Orthodox Jewish men in the New York area, culminating in murders in Jersey City, NJ, and Monsey, NY. Here is what the Times itself reported in February 2020: "Most of the anti-Semitic incidents in New York have not been perpetrated by jihadists or far-right extremists, but by young African-American men." In fact, I believe that none of incidents were ultimately traced to "far-right extremists." The Jersey City and Monsey murders, which were of course covered in the Times, were perpetrated by individuals who had imbibed hateful extremist black nationalist ideologies.

Do the Times' reporters read their own paper, or do they just go with the prescribed narrative?

Second, the notion that the right-wing attacks were a product of being emboldened by Donald Trump is reported as a simple fact; there is, however, a lot of nuance involved (e.g., both attackers expressed anger and disappointment that Trump did not turn out to be an antisemite, not to mention several antisemitic murders by white supremacists during the Obama years, including at the Holocaust Museum and the Kansas City JCC).

Third, like much of the American media, the Times seems utterly incapable of acknowledging that radical anti-Israel activists, be they motivated by Islamism, pan-Arabism, Palestinian nationalism, self-described anti-colonialism, and/or antisemitism, are hostile to Israel's very existence, not "Israel's right-wing government." It's not uncommon to see Hamas, for example, described as objecting to Israel's "occupation of the West Bank," as if Hamas doesn't explicitly and repeatedly announce that it considers all of "Palestine" (that is, including pre-1967 Israel) to be "occupied" and that it wants to destroy Israel. Does the Times really think that people attacking Jews on the street would be content if only Yair Lapid was PM of Israel?

As an aside, I've noticed on social media that many people who consume a lot of news haven't even been aware of the big spike in antisemitic violence over the past two weeks. This is undoubtedly because media outlets like the Times have given it only a fraction of the attention they gave to a few hundred tiki-torch wielding white surpemacists in Charlottesville in 2017--and I'm referring to coverage before violence broke out, when the media descended on Charlottesville as if hundreds of thousands of white supremacists were gathering there.