Don't Dilute My Coca-Cola with Your Concealed Carry


Robert Troy Hoff tried to register this trademark, for use on clothing: 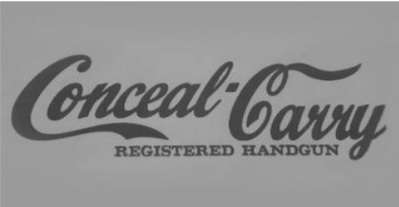 Some Georgia company that had a different trademark objected:

Dilution by blurring is "association arising from the similarity between a mark or trade name and a famous mark that impairs the distinctiveness of the famous mark." Dilution may be likely "regardless of the presence or absence of actual or likely confusion, of competition, or of actual economic injury." The statute's concern is that "the gradual whittling away of distinctiveness will cause the trademark holder to suffer 'death by a thousand cuts.'" …

[A]lthough Opposer often takes public positions on issues of public interest, it "has not to date taken a position on any issues relating to firearms, gun control or the Second Amendment." He expressed Opposer's concern that if it "was incorrectly associated with a position that TCCC had not adopted or with which TCCC did not agree, TCCC would lose control of at least a portion of its goodwill and reputation that the Coca-Cola Script Mark symbolizes, especially with consumers who do not agree with the position."

Opposer's concerns are legitimate. There is a fervent debate in the United States between proponents of gun rights, such as Applicant, and proponents of limitations on those rights. In that debate, Opposer, like Applicant, has the right to take one side or the other, or not to participate at all. We have found above, however, that Applicant's mark will immediately conjure up Opposer's famous Coca-Cola Script Mark, resulting in the association of Opposer with a particular position in the minds of purchasers and observers of Applicant's clothing.

Even if that association is ephemeral for some persons, it compromises Opposer's ability to exercise exclusive control over the goodwill symbolized by the Coca-Cola Script Mark. For members of the public who have been exposed to Applicant's mark, Opposer may appear to be a hypocrite if it later elects to take the opposite position in the gun rights debate or simply remains neutral.

There seems to be some blurring between dilution and the separate trademark theory of confusion in this analysis: Dilution can happen even if everyone understands that Coca-Cola isn't taking any stance on gun control, and is not confused into thinking that Coca-Cola is a hypocrite in the event it eventually opposes gun control. (The opinion notes that, "Because we have found for Opposer on its dilution claim, we need not decide its likelihood of confusion claim.")

The dilution theory is simply that if similar marks are allowed (not just this one but many others in other fields), the Coca-Cola mark will bring to people's minds those other marks, even if they consciously recognize that Coca-Cola hasn't endorsed those marks. Nonetheless, I do think such dilution is likely, for close to the reasons that the panel gave.