Profs. Ilana Redstone and John Villasenor are guest-blogging this week about their new book. 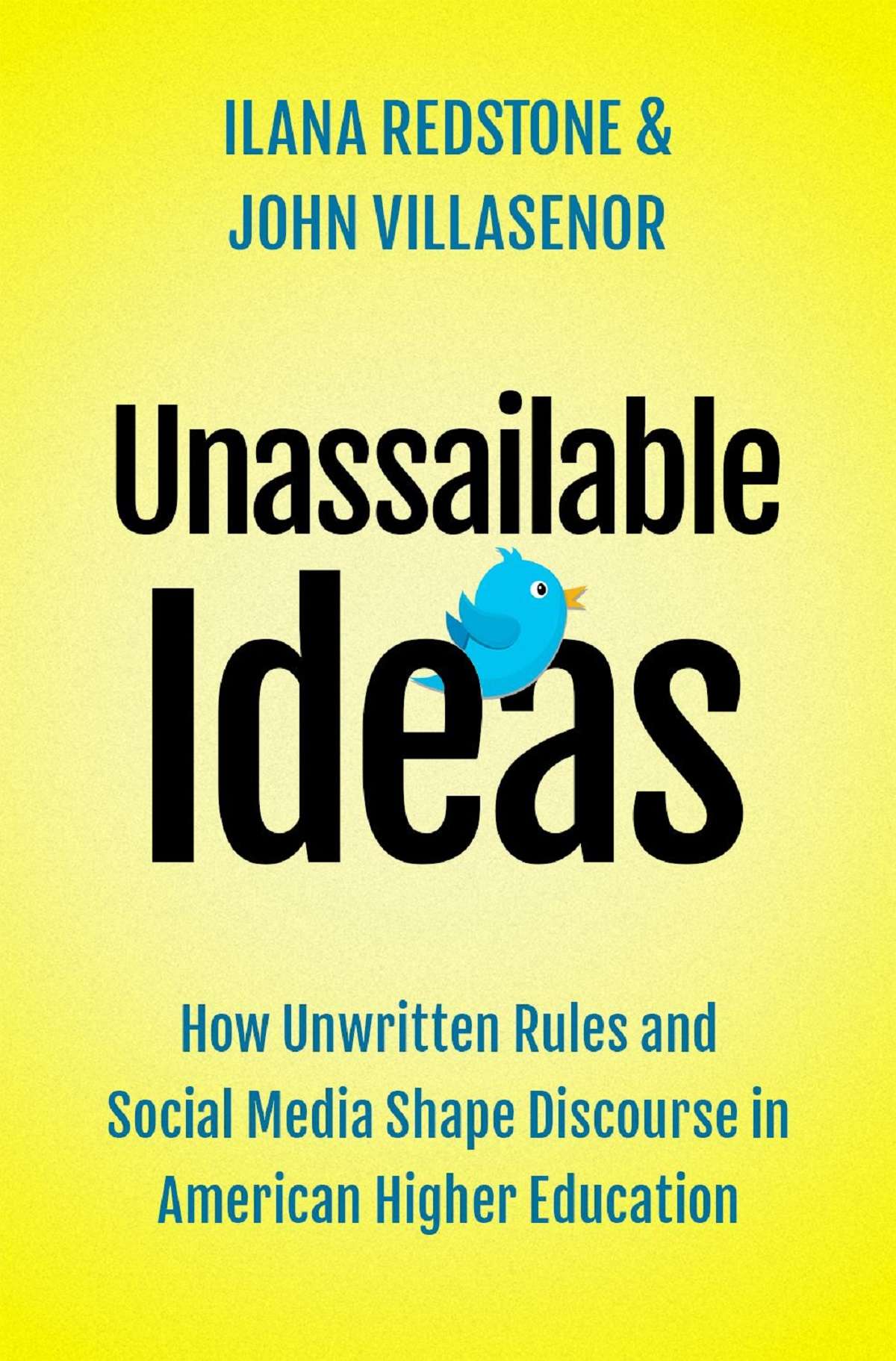 I'm delighted to report that Prof. Ilana Redstone (Illinois, sociology) and Prof. John Villasenor (UCLA, engineering, public policy, law, and management) will be posting this week about their new book:

Open inquiry and engagement with a diverse range of views are long-cherished and central tenets of higher education and are pivotal to innovation and knowledge creation. Yet, free inquiry on American campuses is hampered by a climate that constrains teaching, research, and overall discourse.

In Unassailable Ideas, Ilana Redstone and John Villasenor examine the dominant belief system on American campuses, its uncompromising enforcement through social media, and the consequences for higher education. They argue that two trends in particular—the emergent role of social media in limiting academic research and knowledge discovery and a campus culture increasingly intolerant to diverse views and open inquiry—are fundamentally reshaping higher education.

Redstone and Villasenor further identify and explain how three well-intentioned unwritten rules regarding identity define the current campus climate. They present myriad case studies illustrating the resulting impact on education, knowledge creation-and, increasingly the world beyond campus. They also provide a set of recommendations to build a new campus climate that would be more tolerant toward diverse perspectives and open inquiry.

An insightful analysis of the current state of academia, Unassailable Ideas highlights an environment in higher education that forecloses entire lines of research, entire discussions, and entire ways of conducting classroom teaching.

"In Unassailable Ideas, Redstone and Villasenor identify several assumptions that have come to act as dogmas in academia, and they show what happens when faculty and others run afoul of the new dogmas. Outrage and censorship cause problems not just for the faculty involved, but also for those watching, who must be careful to avoid running afoul of the dogmas themselves, and for everyone who has a stake in health of universities and the quality of the scholarship they produce. For anyone trying to get a better understanding of what's been happening at American colleges and universities and wondering how serious the threats to free speech and academic freedom actually are, this book is a must-read."
—Bradley Campbell, Professor of Sociology, California State University, Los Angeles

"Redstone and Villasenor use an interesting and important lens to view timely, challenging issues facing American higher education. Their synthesis of how social media and certain sets of beliefs can stifle discourse is worthy of serious consideration."
—Michelle Deutchman, Executive Director, University of California National Center for Free Speech and Civic Engagement

"Anyone under the impression that all that happened on college campuses in the mid-2010s was a few student protests getting a little out of hand should read this brisk, penetrating book. The issue is a nearly medieval ideology that has taken hold of academic culture over the past 25 years, and we ignore it at the peril of young American minds."
—John H. McWhorter, Associate Professor of English and Comparative Literature, Columbia University

"Is free speech under threat on our campuses? As this smart little book reminds us, that's the wrong question. The real danger to higher education isn't a cabal of jack-booted censors, but the much subtler forces that discourage us from critiquing our dominant assumptions about multiculturalism, discrimination, and identity. A truly liberal campus would engage in a full-throated argument about these principles, instead of trying to place them beyond debate. Let's hope that this book sparks precisely the dialogue that our colleges and universities have suppressed."
—Jonathan Zimmerman, Professor of Education and History, University of Pennsylvania

I very much look forward to their posts!