There's Some "Hate Speech" for You


A reader passes along this item, which led to his account being locked (for 30 days, apparently) on "hate speech" grounds by Facebook (I've redacted his name below): 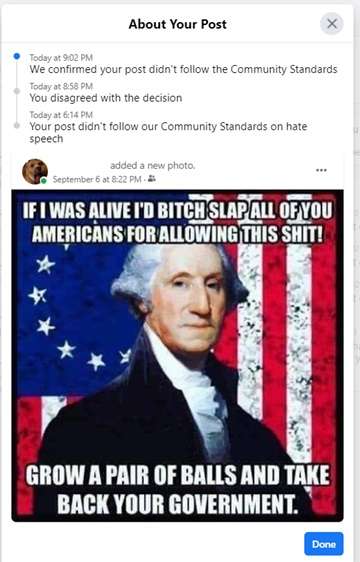 Why exactly is that "hate speech"? I posed the question to some law professors. Some thought it was because it was "blatant misogyny," because of the word "bitch" or perhaps the phrase "bitch slap." Someone added that the "grow a pair of balls" may be further evidence of "misogyny." (I'm skeptical of that theory, but this is what I was told.) The Facebook "hate speech" policy gives "bitch" as an example of a word that's forbidden, though only when "targeting a person or group of people on the basis of their protected characteristic(s)," and it's pretty clear that this meme doesn't target people based on sex. (I don't much care for "bitch slap" and even "bitch" myself, but they seem far removed from "hate speech," especially used in this context.)

Someone else suggested that it might be "direct attack on people based on what we call protected characteristics," namely "national origin"—i.e., Americans. My friend and coauthor Mark Lemley reported,

Whether for ideological reasons or to show even-handedness, Facebook has been blocking posts viewed as "anti-American."  I had a post blocked (and the block upheld on appeal) for saying "Americans are idiots" to caption a picture that showed Americans being, well, idiots.

Now Facebook is a private company, and is legally entitled to block what it wants. And it's hard to say that there's real damage in its blocking memes like this, or any real chilling effect on speech, at least speech by private individuals: How much do you really lose from having your post deleted and your Facebook account blocked? (Some say you gain from it.)

Yet instances such as this help show, I think, the danger of attempts to restrict "hate speech," whether through broadly applicable laws or through campus speech codes and the like—situations where people might be much more worried about punishment. "Hate speech" is always either defined very vaguely, or defined more precisely (as Facebook is trying to do) but in a way that ends up being ridiculously broad.

Such attempts to suppress "hate speech" always start with people talking about how of course we need to stop Nazis and racial epithets and calls for genocide. But they don't seem likely to end with that.