Reason Is a Finalist for 8 Southern California Journalism Awards

The Los Angeles Press Club on Monday announced the finalists for the 64th Southern California Journalism Awards recognizing work published in 2021. Reason, which is headquartered in Los Angeles, is a finalist in eight categories.

We'd like to thank both the judges who reviewed our submissions, and the Reason readers, viewers, and listeners who make our work possible through their financial support. Without further ado:

Senior Editor Elizabeth Nolan Brown is a finalist in the national 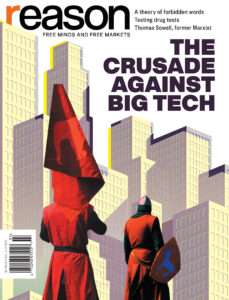 political/government reporting category for "The Bipartisan Antitrust Crusade Against Big Tech." The cover story for our July 2021 issue, Brown's feature susses out the partisan motivations behind seemingly bipartisan efforts to bring Big Tech under government control, as well as the nearly nonexistent role consumer benefit plays in modern antitrust efforts:

Is Facebook a monopoly? Should Amazon be forced to do business with the new social media platform Parler? Is Apple harming its customers—and maybe democracy—by installing the Safari web browser on iPhones? Did Google bully people into using its search engine?

All of these questions have been raised in recent U.S. antitrust probes and lawsuits. The queries are unlikely to result in widespread improvements to the welfare of tech consumers—which, these days, includes just about everyone. Yet some of the country's top prosecutors, pundits, bureaucrats, and elected officials have made them a priority, often in open defiance of a longstanding principle that says ordinary customers should be at the center of conversations about antitrust.

Editor at Large Matt Welch is a finalist in the sports commentary category for "How Government Devastated Minor League Baseball." A feature in our November 2021 issue, Welch's story explains how Congress helped Major League Baseball put the screws to farm teams:

Through a mix of obfuscating patriotism, congressional camera hogging, and legal reasoning more twisted than a kosher Cyclones pretzel, Washington over the past century-plus has granted latitude to MLB that no other professional sport enjoys. Baseball's preeminent global league has not only blocked all halfway serious competition to its legally protected North American monopoly; it can dictate the most fundamental of operational details—employee salaries, game rules, even existence—to the once-independently owned professional teams and leagues that groom talented young men in the vast expanses between school and The Show.

Joanna Andreasson, Reason's art director, is a finalist in the best issue category for her design of our truly stunning December 2021 issue marking the 30th anniversary of the collapse of the Soviet Union: 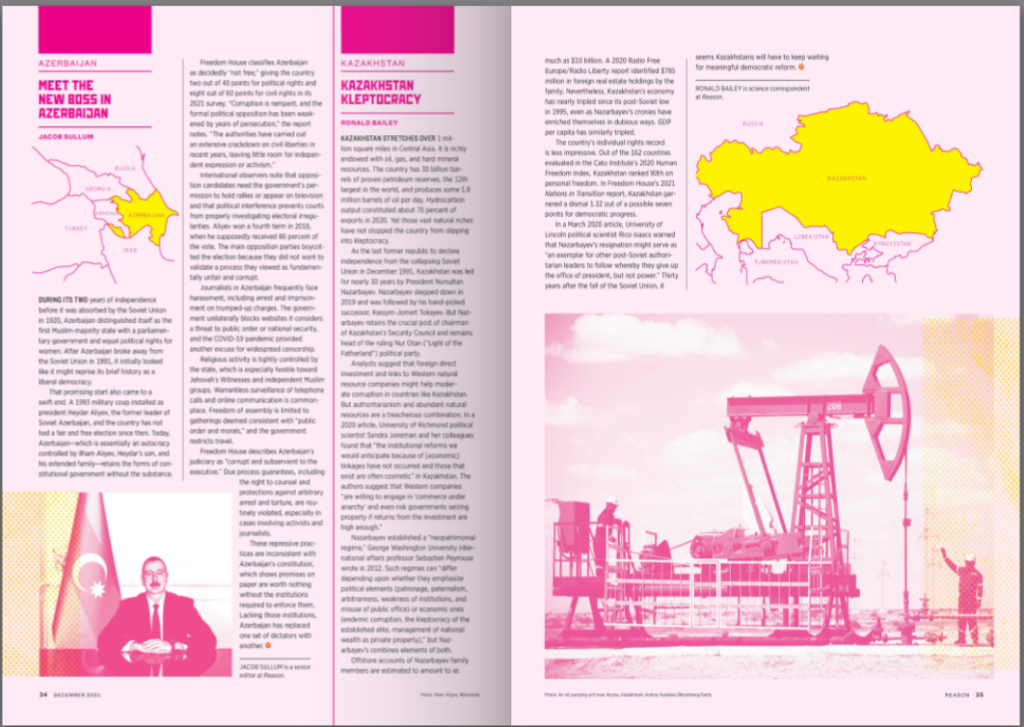 Editor in Chief Katherine Mangu-Ward is a finalist for best magazine columnist for "The Unexpected, Predictable End of the War in Afghanistan," which ran in the November 2021 issue and in which Mangu-Ward argued that America's withdrawal from Afghanistan was both "a predictable disaster" and "an incredible, surprising anti-war victory." Good herbs for your peace pipe here:

But sending more people into harm's way for ill-defined goals does nothing to justify the tragic loss of those already gone. If anything, invoking their deaths to continue in a fruitless struggle multiplies them—the horrible compound interest of war. And make no mistake, the struggle was indeed fruitless, as the rapid collapse of everything Americans had worked for demonstrated in short order.

Reporter C.J. Ciaramella is a finalist in the magazine investigative category for "The $2 Drug Test Keeping Inmates in Solitary," which ran in our July 2021 issue:

Forensic experts say the tests can't be relied on alone; they're not admissible evidence in court; and the manufacturers explicitly warn that all tests should be sent to crime labs to be verified. New York's prison system suspended the use of similar tests last summer because of such worries. Yet the federal Bureau of Prisons relies solely on such tests to put inmates in solitary confinement, take away good behavior credits that count toward early release, and strip them of visitation rights. Meanwhile, low evidence standards make it just about impossible for federal inmates to challenge the results of these tests in court. Steffey and other formerly incarcerated people say inmates are being jammed up on bad evidence with virtually no avenue for recourse.

The inimitable Remy is a finalist in the humor/satire writing category for "Dogecoin Rap," which absolutely still holds up:

And Zach Weismueller, senior producer, is a finalist in not one, but two categories: "Los Angeles Is Squandering $1.2 Billion While Homeless Face a 'Spiral of Death'" is a nominee in the TV/film investigative category, and "Why I Left California for Florida" is up for an award in local political/government reporting. Watch both below:

Once again, thank you to our readers, viewers, and listeners for their attention and their financial support. Not yet a supporter, but feeling inspired by the stories above? There's a page for that.