The U.K. kept schools open and masks off, and now delta is in their rearview. Why can't Yanks learn?

Over the weekend, parents of two of the four children who participated in my then-kindergartner's learning "pod" during the part-time, COVID-impaired New York City public school year of 2020-21, wearily began the process of organizing yet another backup plan for when the local elementary school building inevitably closes down in response to the delta variant this fall.

What about the two sets of parents that did not? Our kids are attending a brand-new private school, literally across the street. Far from preparing to close, that institution is bracing itself for a possible influx of kids whose families cannot bear a third consecutive school year maimed by adults' inability to plan around risk.

With one-quarter of students nationwide already back in school, and the delta-fueled fourth wave of COVID peaking along the Gulf Coast and Mississippi River Basin, all signs point to another bifurcated K-12 year, in which decision makers in Democratic-run polities advocate precautionary restrictions virtually no countries in Europe have adopted, while private schools everywhere and public schools in most Republican-run areas remain open full-time.

"It's time to accept that school won't be normal in the fall," wrote the gang over at Vox, illustrating one of the functions of "explanatory journalism" during Democratic administrations.

Unlike last school year, when part-time learning and hair-trigger closures were the rule in districts where Democratic-leaning teachers unions hold sway, the default this year—incentivized by the Biden administration's strings-attached disbursement of $41 billion of its overall $122 billion K-12 COVID-relief package—will be physical buildings being open five days a week. But there a half-dozen tripwires set to blow up reopening at any moment.

The first is the delta variant itself, which, along with a huge spike in resurgent respiratory syncytial virus (a disproportionately child-impacting infection for which there is no vaccine) is already leading to more pediatric hospitalizations right now than during the pandemic's peak in January, straining capacity at children's intensive care units in COVID hotspots. Three schools in Lamar County, Mississippi, switched to remote learning this month; several schools in Kentucky and Georgia have also postponed the start of the year.

COVID, despite Americans' incessant attempts to pin its ebbs and flows on politics and comparative non-pharmaceutical interventions, has until now hewed instead toward regional and seasonal patterns, suggesting that the current red-state hospitalization wave will soon be supplanted by surges up north and along the coasts. Even if that spike is lessened by higher blue-state vaccination rates—and keep in mind that the current COVID-hospitalization leader, Florida, has the exact same vaccination rate (50 percent of inhabitants) as the rest of the country—we can expect the more stringent Democratic policies to trigger far more school shutdowns.

You can visualize, at least symbolically, the mostly partisan—as opposed to mostly viral—divide on COVID school policies, by looking at this Burbio map of state-mandated school-masking policies, updated weekly. 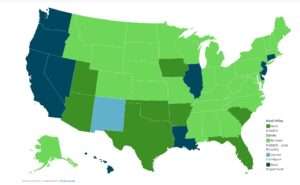 Where masking is stricter, generally speaking, so are rules governing other school-related mitigations: distancing, quarantining, testing, vaccinations, responses to community spread. Those same districts are also likelier to take their cues from the institutionally overcautious Centers for Disease Control and Prevention (CDC).

The CDC on Thursday issued updated guidance urging "universal indoor masking by all students (age 2 and older), staff, teachers, and visitors to K-12 schools, regardless of vaccination status," and advising that "close contacts [of infected people] who are not fully vaccinated should…quarantine at home for 14 days after exposure."

How would that 14-day quarantine play out in a large public school, if strictly applied? It took this NJ.com article 10 paragraphs to come up with a decidedly non-definitive answer, concluding with this quote from a district official: "We are in the process of working with our nurses and the local department of health, as well as our school principals, in planning for quarantine and isolation situations."

Given recent pre-delta history—our 1,000-student public elementary school this February announced late on a Sunday evening that it would close for 10 days because a grand total of two humans had recently tested positive for COVID—it is reasonable to assume, and sadly necessary to plan around, that extrapolations of CDC rules will lead to more school closures, even though adult staff members have had access to vaccines for more than half a year.

Will closing schools make kids who are ineligible for the vaccine any safer? That has not been the case so far. Children in school and day-care settings have been at lower risk of catching COVID in those settings than they have been outside of them. That this is not more widely known is an indictment of the U.S. news media, whose coverage has been the most relentlessly negative on record.

But what about the delta variant, which is far more transmissible, if otherwise roughly the same in effects on unvaccinated populations, including kids? "Our most significant post-Delta data comes from the UK," Brown University economics professor and school-COVID data-collector Emily Oster wrote this week, "where the positive test rate for children up to age 11 was around 2% at the height of the Delta surge, when schools were open (largely without masks). This 2%, of course, reflects transmission from all sources—schools, but also households. Repeat: Household transmission is a much more common vector for children, meaning vaccinating people in the household is your most important prevention strategy." (Emphasis Oster's.)

It's also worth noting that, unlike in the U.S., kids between the ages of 13 and 17 are still ineligible for COVID vaccines in the U.K.

Delta's reintroduction of that unhappy sense of looming uncertainty in our personal lives has made people forget what we have already learned about the virus, while ignoring or wildly misinterpreting relevant contemporary data from delta itself.

Delta does not change the fact that kids who catch COVID have roughly the same chances of hospitalization (one in 200, according to Oster) and death (one in 20,000–80,000) as kids who catch the flu. ("The narrative that this is a new virus which is tremendously more dangerous for children is just simply not supported by the data," she writes.) Delta does not change the fact that kids are more likely to catch COVID from unvaccinated adults than from their friends at school. Even after delta tore through the U.K., the age cohort with the lowest infection rate was 2- to 11-year-olds.

The other thing that delta won't change, but will certainly make worse, is that school closures and remote learning have been an absolute educational, emotional, and developmental wipeout for kids. "Just 9% of Newark students met state math standards this spring, data show," Chalkbeat Newark reported last week. "How much did the pandemic affect students?" asked the New York Times late last month. "The latest research is out, and the answer is clear: dramatically." An exhaustive data analysis by the Times last week showed an exodus of more than 1 million kindergartners, including a disproportionate number of poor, minority, and otherwise vulnerable kids.

This miserable record is what New York Gov. Andrew Cuomo threatens to exacerbate when he recklessly mischaracterizes schools as "superspreaders." It's what former Food and Drug Administration chief Scott Gottlieb perhaps unwittingly encourages by analogizing schoolchildren with adults, as he did on this week's Face the Nation: "I can't think of a business right now that would put 30 unvaccinated people in a confined space without masks and keep them there for the whole day. No business would do that responsibly, and yet that's what we're going to be doing in some schools."

Policy making during a pandemic is hard. Parents, myself included, will do almost anything to keep their kids out of harm's way. It's nausea-inducing to see that next wave approaching; the sense of surl and snap in the air is palpable. And I agree with the strict mitigationists that more school districts should be generating random testing data among unvaccinated kids.

But it's up to the rest of us to actually read that data before falling back into the same old damaging patterns of mistreating children as disease vectors too inherently dangerous and vulnerable to be left in groups. Scores of New York City public schools closed during its "Summer Rising" session due to hair-trigger COVID protocol; meanwhile, it's still widely unknown that the city's positive test rate among Summer Rising students and staff was just 0.21 percent from July 6 to August 5, and 0.37 percent in those last seven days.

Those numbers are certainly going to go up. Are we up to the task of contextualizing them, and crafting rational policy responses? It's a question of great urgency for the pod parents who stayed public, and for everyone else who cannot afford to choose alternatives to government-run school.