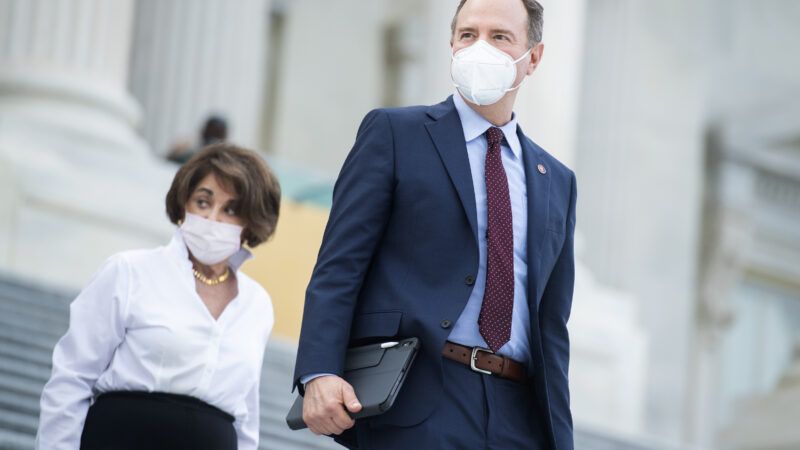 Today two Democratic members of Congress sent letters to the presidents of Comcast, AT&T, Verizon, Cox, Dish, and other cable and satellite companies implying that they should either stop carrying Fox News, One America News Network, and Newsmax or pressure them to change their coverage. According to the lawmakers, these conservative channels are responsible for promoting misinformation and political violence.

"To our knowledge, the cable, satellite, and over-the-top companies that disseminate these media outlets to American viewers have done nothing in response to the misinformation aired by these outlets," wrote Reps. Anna Eshoo and Jerry McNerney, both of California.

Released in advance of the House Committee on Energy and Commerce's Wednesday hearing on "Disinformation and Extremism in the Media," the letter makes clear that some lawmakers do not want television providers to let their customers watch conservative news channels. (Disclaimer: I am interviewed regularly on Fox News and Newsmax.) Eshoo and McNerney ask the companies to explain the "moral and ethical principles" that undergird their decisionmaking with respect to which channels are carried, how many viewers tuned in to these channels during the four weeks before the the Capitol riots on January 6, 2020, and what steps were taken to "monitor, respond to, and reduce the spread of disinformation."

False claims do appear with some frequency on conservative news channels, streaming services, and social media. But they also appear in The New York Times, on CNN, and in other mainstream information outlets. The traditional remedy to misinformation is to file a defamation lawsuit. The federal government does not need to involve itself.

On the contrary, the First Amendment prohibits Congress from infringing on free speech—and that includes the freedom of provide companies to decide what kind of speech appears on their platforms. Politicians are not in charge of setting the parameters for acceptable speech on the internet and television. That responsibility devolves to individual companies and individual viewers.

Make no mistake: The letter to television providers was an act of intimidation. This behavior is equally unacceptable when Republicans do it: Calls to regulate tech companies because Facebook, Twitter, and Google make moderation decisions that irritate conservatives are also threats to free speech. Members of both political parties are intent on wielding their power to curb the speech of their adversaries, which is precisely why the government does not—and should not—have the power to compel or censor speech.

"As the most watched cable news channel throughout 2020, Fox News Media provided millions of Americans with in-depth reporting, breaking news coverage and clear opinion," said a spokesperson for Fox News in a statement.* "For individual members of Congress to highlight political speech they do not like and demand cable distributors engage in viewpoint discrimination sets a terrible precedent."

As the words "misinformation" and "disinformation" come to refer not to just clear falsehoods but to information that is contentious, disputed, or highly partisan but nevertheless true, it is important to reject the idea that there is a "fake news" exception to the First Amendment. If a statement is libelous, then an outlet can be sued for printing it. If it contains a call to violence, platforms may have some legal responsibility to take action against it. But the First Amendment's protections are extremely robust, and the government may not criminalize the dissemination of information that is merely wrong or uninformed. Such a move would imperil not just right-wing news channels, but all speech that criticizes the government.

*Update: A statement from Fox News was added to this article.