Biden's Pick To Run the Commerce Department Is No Progressive

Rhode Island Gov. Gina Raimondo seems unlikely to double down on the past four years of economic foolishness at the Commerce Department. 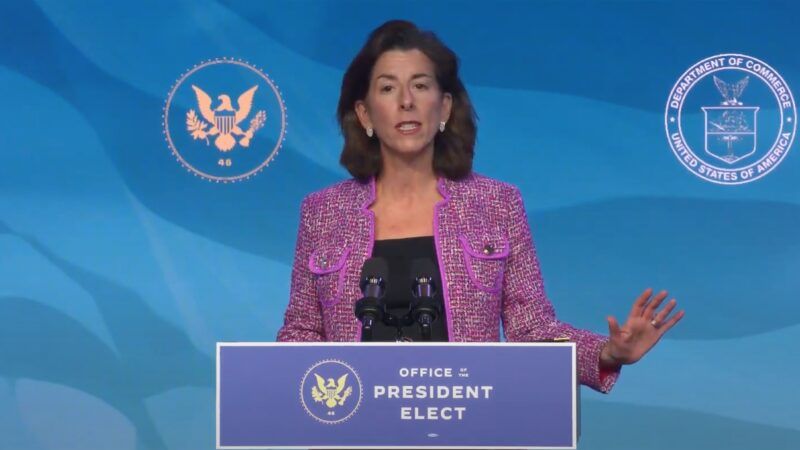 In nominating Rhode Island Gov. Gina Raimondo to run the Commerce Department, President-elect Joe Biden has picked a pragmatic, centrist Democrat who understands the value of capitalism and who has a track record of standing up to public-sector unions.

First as the state's treasurer and then as governor, a post she's held since 2015, Raimondo has gained a reputation for bucking lefty special interests that typically dominate Democratic politics—no easy task in what's perhaps America's bluest state. She commissioned an independent analysis of the state's pension system in 2011 that revealed it had less than half of the long-term assets needed to remain solvent. That started a years-long effort to reform the system, despite the opposition of public sector unions. Raimondo succeeded by building a political coalition and bringing the looming crisis to the public's attention.

Raimondo also took on the public school establishment in Rhode Island. She blocked the passage of a bill that would have effectively banned the creation of new charter schools in the state, then backed efforts to expand charter schools in parts of the state.

As the head of the federal Commerce Department, Raimondo probably won't have much to say or do about school choice or pensions, of course. Still, her clear-eyed prioritization of economically sound policies in the face of opposition from the left is a welcome sign—particularly after four years in which the Commerce Department was used to implement politically motivated attacks on free trade and the once-per-decade census. Raimondo and Biden should act swiftly to undo the tariffs imposed by the Trump administration, despite what some progressive Democrats would prefer.

Raimondo is not without some serious blemishes—notably her close ties to Michael Bloomberg, the former New York City mayor and longtime libertarian nemesis—but her selection seems to indicate that Biden is seeking to return the Commerce Department to its traditional role as a middle man between the presidency and corporate America after the Trump years saw the department take a more politicized tack.

That's not always a good thing, of course, and Raimondo's connections to Wall Street will certainly receive scrutiny.* But Raimondo looks like a better choice than many of the alternatives. Progressive groups like Data For Progress urged Biden to pick a candidate who would tackle "economic inequality" and the democratic socialist magazine Current Affairs said "environmental sustainability" should be a priority. Billionaire climate change activist and failed presidential candidate Tom Steyer was a name floated by some progressive groups, and he reportedly lobbied Biden's team for the job.

Despite being an often overlooked part of the federal Leviathan, the Department of Commerce's sprawling mandate means it plays a role in shaping policy on issues as diverse as climate change, international trade, and even congressional gerrymandering. In the hands of someone like Steyer, the Commerce Department's agenda would likely look a lot different than it will under Raimondo.

Since it oversees a lot of things that shouldn't really require the government to be involved at all, the best-case scenario for the Commerce Department is for Americans to forget it exists at all.

That, unfortunately, hasn't been the case for the past four years. Commerce Secretary Wilbur Ross, one of the few members of President Donald Trump's cabinet to serve the full four years, memorably made a fool of himself by promising that tariffs on steel and aluminum imports would hardly be noticed by most businesses and consumers. It was an argument that undermined itself—the tariffs were intended to force businesses to make different purchasing decisions and thus would have to be noticed in order to work. Worse, Ross approved the vapid "national security" rationale for imposing those tariffs, then oversaw the development and operation of an opaque, confusing, and easily corrupted process to determine which American businesses could dodge those tariff costs.

Ross also led Trump's unsuccessful effort to exclude undocumented immigrants from the 2020 census, which would shift the once-per-decade redrawing of congressional districts and politically disenfranchise parts of the country with high immigrant populations.

In short, the Commerce Department for four years has been a tool for expanding bureaucratic control of the economy under the false premise that federal officials know how to run businesses better than the people who actually do—and for politicizing the normally rote functions of the government.

And that was before Democrats took charge. Thankfully, Raimondo seems like an unlikely candidate to double down on the past four years of economic foolishness. Perhaps we'll be able to forget about the Commerce Department once again.

*CORRECTION: This article has been updated to clarify details about Raimondo's private sector career.