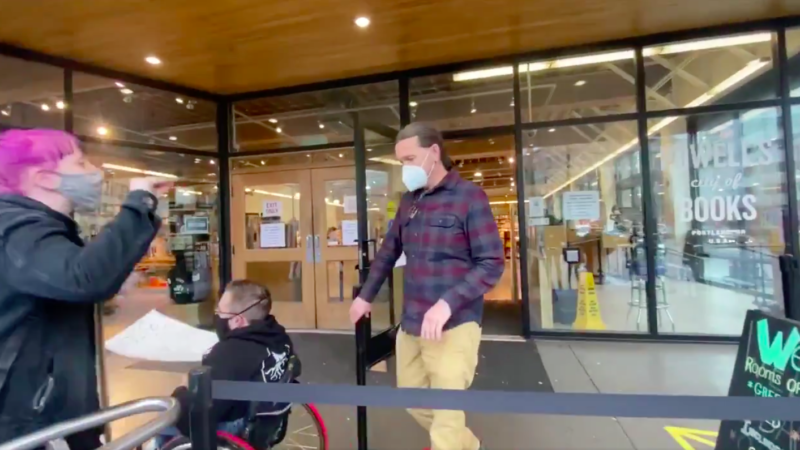 Far-left activists surrounded Powell's Books in Portland on Monday and demanded the store stop selling Unmasked: Inside Antifa's Radical Plan to Destroy Democracy, a book about antifa written by Andy Ngo. The protests forced the store to close early.

Powell's announced that it would not carry the book in its physical store, though it will still be available for purchase online.

"This book will not be on our store shelves, and we will not promote it," said Powell's in a statement. "That said, it will remain in our online catalogue. We carry books that we find anywhere from simply distasteful or badly written, to execrable, as well as those that we treasure. We believe it is the work of bookselling to do so."

Ngo, who has documented antifa's tactics for various conservative news websites and was once attacked by the group, tweeted video footage of the protesters. One such protester claimed that disrupting the book's dissemination was akin to "stopping the historical publication of Hitler's 'Mein Kampf.'"

An #antifa protester outside @Powells Books explains that stopping the release of my upcoming book would be like stopping the historical publication of Hitler's "Mein Kampf." pic.twitter.com/8NVTtQwYNz

Powell's noted that the store is committed to free speech, and previously received "credible bomb threats" for selling books by Salman Rushdie, whose 1988 book The Satanic Verses made the author a target of Islamic extremists:

There are books in our stores and online inventory that contain ideas that run counter to our company's and our employees' values of safety, equality, and justice. However, many of us also read these books to inform ourselves about events; learn about local and global history; and to understand the arguments of people and groups with whom we disagree. While we understand that our decision to carry such books upsets some customers and staff members, we do not want to create an echo chamber of preapproved voices and ideas. It is not our mission or inclination to decide to whom our customers should listen.

The store's owners are entirely correct to assert their right to sell books on a wide range of subjects, even if some of these books do not meet with the approval of far-left activists. Antifa takes the view that no one should be allowed to report critically on its activities. Despite their benign-sounding moniker (which is short for "antifascism"), people associated with antifa deliberately practice illiberalism: They wish to deny free speech protections to the far-right and its enablers, a group of enemies that antifa defines very broadly. Indeed, in this case, the enablers of fascism evidently include a book store that isn't even carrying the objectionable tome on its shelves.

Few acts of censorship are as overt as a mob deciding which books other people should be allowed to read. The authoritarian behavior of Portland's progressive activist community is a subject well worth exploring in book form.