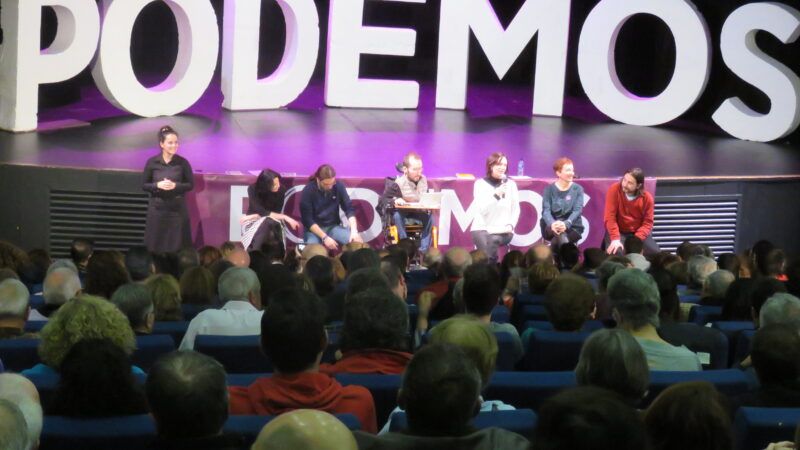 In the 1960s, Spain sent a curious new export to its former colonies in Latin America: communist priests who took up arms against national governments. Take the case of Manuel Pérez Martínez (1943–1998), a Spanish cleric who arrived in Colombia in the late '60s, where he joined and eventually led the National Liberation Army, an extant Marxist-Leninist guerrilla outfit founded in 1964 under Fidel Castro's auspices.

In recent decades, Latin America returned the favor by exporting to the mother country its own collectivist concoction, 21st century socialism, albeit with considerably more success. While the peninsular clerics of yesteryear floundered in their attempt to impose communism on skeptical New World nations, Hugo Chávez's brand of "neo-Bolivarian" politics has made deep inroads in Spain, to the extent that its adherents are now co-governing the country.

In the November 2019 general election, the Spanish Socialist Workers' Party (PSOE) won the largest share of the vote (28.25 percent) but lacked the number of parliamentary seats necessary to form a government. Its leader, Pedro Sánchez, who had led a minority government since June 2018, had to rely on the tacit support of Catalan separatists in order to form a coalition with Podemos ("We Can"), a party well to the left of the socialists created in 2012 whose leadership has been deeply involved with Venezuelan Chavismo.

According to the Spanish daily newspaper El País, the Center for Political and Social Studies Foundation (CEPS, its acronym in Spanish), a now-defunct think tank tied to Podemos politicians that promoted "wealth redistribution," received €3.7 million ($4,543,000) in political consulting fees from the Venezuelan regime between 2002 and 2014. Podemos leader Pablo Iglesias, who was on the CEPS governing board, worked for the organization from Caracas in 2006 and 2007, when Chávez was at the height of his power.

"Living in a country like this is very interesting," Iglesias once pontificated. Venezuela "is producing so many changes and undergoing such a great transformation that it can become a democratic example for the citizens of southern Europe." He even went as far as suggesting that it was "fundamental" for a Chávez-led Latin America "to invade Europe." Iglesias tried to distance himself from Chavismo as Venezuela reached 10,000 percent annual inflation levels and 4.6 million of its citizens sought refuge in neighboring countries. Then, in January 2020, he became Spain's second deputy prime minister—a type of vice president—and the minister of social rights.

The PSOE-Podemos coalition is not only Spain's most left-wing government since the country restored democracy after dictator Francisco Franco's death in 1975; currently, it's also the most leftist government in the entire European Union (E.U.). As you would expect, this has brought about a barrage of progressive pet projects; in a taste of things to come, Iglesias' party added the feminine adjective unidas or united to its name after merging with the Izquierda Unida ("United Left") coalition in 2019. Once in office, one of the government's priorities has been to rewrite the Spanish constitution with "inclusive language."

The rule of hard-line Spanish progressives has also meant a torrent of debt, public spending, and tax increases. In the midst of the pandemic, which hit Spain particularly hard given its reliance on tourism and small businesses, debt levels climbed to a record €1.29 trillion ($1.53 trillion) in August, a figure that exceeded 100 percent of GDP. In October, the International Monetary Fund (IMF) warned that Spain's public deficit would be an enormous 14.1 percent of GDP in 2020, its highest in recent history (although not quite as high as the 15.2 percent deficit in the United States.) The government's budget for 2021 also includes record levels of spending after the executive raised the ceiling on non-financial expenditures by over 50 percent.

In part, Spain's spending spree will be subsidized with €140 billion ($172 billion) of E.U. money, part of a "recovery fund" agreed upon last July at an emergency summit in Brussels, where the so-called Frugal Four countries—the Netherlands, Denmark, Sweden, and Austria—were pitted against Spain and other Club Med nations that demanded rescue packages and debt mutualization by means of Eurobonds.

In the heat of the debate before the final deal was reached, Wopke Hoekstra, the Dutch finance minister, enraged the media by suggesting that the E.U. investigate Spain's supposed lack of financial means to deal with the crisis. Sánchez responded with several Twitter lectures on Europe's obligation to choose solidarity over individualism. At the height of its global power under the Habsburg dynasty, Spain ruled the Netherlands; now, its public spending depends on Dutch largesse. Where some see decline, Iglesias celebrates "the end of neoliberalism and austerity."

The Spanish government has also taken advantage of the current crisis to impose drastic tax hikes. These include a "tax harmonization" scheme—a euphemism for getting rid of fiscal competition—that would end the freedom of autonomous communities, the largest political and administrative units in Spain, to set their own policies in terms of wealth, inheritance, and income taxes, the last of which consist of both a national and a regional rate.

Clearly, this is a central government power grab at the expense of the Community of Madrid, which recently became the country's largest regional economy after surpassing Catalonia; its per capita GDP levels are also the highest in Spain. Successive governments in Madrid, where a coalition led by the conservative Popular Party is now in power, have opted not to impose a wealth tax on citizens holding at least €800,000 ($982,000) in assets (not counting €300,000 or $368,000 for the value of a family residence). And although Madrid also charges some of the country's lowest rates for inheritance and income taxes, the region raises €900 million ($1.1 billion) more in taxes per year than the far more interventionist Catalonia according to economist José María Rotellar.

Hardly devoted to the Laffer Curve, the Republican Left of Catalonia, the pro-Catalan independence party that allowed Sánchez to become president, recently accused Madrid of practicing "fiscal dumping." The Spanish government proceeded to accelerate its plans to enforce minimum wealth and estate tax rates across the entire country. Madrid's regional government, however, is fighting back.

Isabel Díaz Ayuso, the Popular Party president of the Community of Madrid, stated that "if Catalonia wants fiscal harmonization, they should reduce their own taxes," a reference to that region's notoriously high taxation levels. According to Javier Fernández-Lasquetty, Díaz Ayuso's finance minister, if Madrid were to charge the same tax rates as Catalonia across the board, each household would pay an additional €2,001 ($2,455) per year in taxes, the equivalent of an average monthly salary and 21 percent more than what a typical family spends annually on leisure and culture. Spain's socialist government, Fernández-Lasquetty argues, has launched "a fiscal aggression against the residents of Madrid."

The majority of European countries that had wealth taxes in 1990 have abolished them since they found them to be counterproductive, but Spanish progressives have failed to learn this lesson. They insist on targeting assets that, like real estate, are already taxed (necessarily, a property tax taxes wealth). In the case of actual returns, wealth taxes "add an extra layer of income tax" that imposes the highest rates on people with the lowest returns, while even those who lose money are forced to pay, as the Cato Institute's Chris Edwards writes.

Beyond the wealth tax debate, the current tussle between Spain's central government and the Community of Madrid contains all the elements of the country's old struggle between centralized absolutism on the one hand and, on the other, free institutions based on local government and limited state power, what 19th century scholar William T. Strong called "the struggle between constitutional liberty and royal prerogative." Beginning in the 11th century, as commerce thrived and towns grew, the rulers of northern Spanish kingdoms began to grant fueros, a word that refers either to general law codes or to municipal charters for specific towns.

The fueros, which granted the members of particular communities legal protection for themselves and their property, grew out of the earlier Visigothic governing principle that, as legal scholar Leonard Liggio wrote, "the king must live on his own resources" and respect the independence of the nobility, clergy, and freemen, who resisted overbearing taxation. In a parallel fashion grew the Cortes, representative assemblies and proto-parliaments that often could withhold money from the kings as they deemed fit. In fact, the Basque provinces of Gipuzkoa, Biscay, and Álava only paid money to the Castilian kings to whom they were nominally subject as extraordinary donatives.

Reconquering Spanish lands from the Moors involved a strong centralization of power; acquiring and administering a global empire under the Habsburgs and their Bourbon successors made this tendency overwhelming. The medieval liberties embodied in the fueros were gradually lost, but the autonomous communities' tax autonomy under the current Spanish constitution is a remnant of Spain's old tradition of liberty. Like their absolutist royal predecessors, however, today's progressives are intent on crushing fiscal freedom wherever it can flourish.

Daniel Raisbeck is a senior fellow at the Reason Foundation. He ran for mayor of Bogota, Colombia, in 2015 as an independent libertarian.