Americans Are in Full Revolt Against Pandemic Lockdowns

Individually and in organized groups, people are pushing back against lockdown orders. 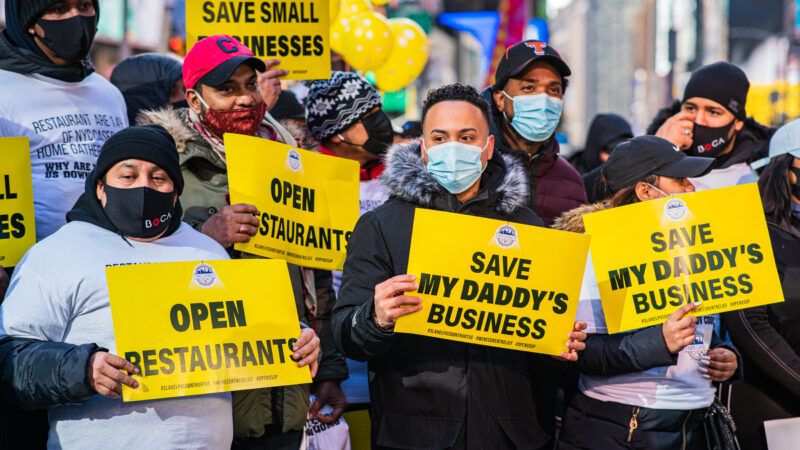 Echoing New York Gov. Andrew Cuomo, New York City Mayor Bill de Blasio warned city residents this week to prepare for a "full shutdown" as part of ongoing efforts to slow the spread of COVID-19. The two elected officials better not hold their breath waiting for compliance. Evidence from around the country shows that many Americans are thoroughly sick of impoverishing, socially isolating lockdown orders, and are revolting against the often-hypocritical politicians who issue them.

"The governor said in a New York Times interview over the weekend that we should prepare for the possibility of a full shutdown. I agree with that," Mayor de Blasio told interviewers on December 14. "We need to recognize that that may be coming and we've got to get ready for that now, because we cannot let this virus keep growing."

The mayor commented following Cuomo's ban on indoor dining at New York City restaurants. That was issued a week after Staten Island residents cheered bar owner Daniel Presti, who was arrested for defying pandemic restrictions. Days later, Presti ran his car into a sheriff's deputy who sought to rearrest him for continuing to serve patrons. Both of the deputy's legs were broken.

While Presti's level of violent resistance against lockdowns is much too extreme, he's not alone in his opposition. From coast to coast, businesses and individuals are ignoring restrictive rules that threaten their livelihoods, stifle social contact, and threaten to strangle the necessary interactions of everyday life.

"Another shutdown just isn't an option for us," the Seven Sirens Brewing Company of Bethlehem, Pennsylvania, announced last week on its Facebook page. "We, and thousands of other small businesses throughout the country simply will not survive. […] After speaking with our bank, staff members, families, attorneys, and local government officials…we have decided we will not comply with future shutdown mandates. We will continue to operate with the same, proven-safe measures we implemented 5 months ago."

The brewery is only one of many businesses listed by Pennsylvania Opening Businesses/Defying the Governor, which has over 43,000 members on Facebook as I write. The group encourages the public the patronize anybody who bucks state rules to continue offering goods and services to willing customers.

"Many readers side with businesses that may stay open in defiance of Pennsylvania's coronavirus shutdown orders," the Morning Call newspaper noted of public response to such stories.

"The last nine months have needlessly put small business owners and employees in the regrettable position of watching their dreams evaporate before their eyes and their families go without basic necessities," the group commented this week on the effect of pandemic lockdowns. It calls for stripping Gov. Tim Walz of his emergency powers and for ignoring restrictions so that people can decide for themselves when and how to interact.

On the West Coast, many restaurants also open their doors to customers despite state orders to the contrary.

"While some of the larger chains and corporations are following the orders, many of the mom and pop shops say going to takeout only would put them out of business," ABC News reported last week.

The city council in Solvang, a tourism-fueled community in Santa Barbara County, recently voted to ignore shutdown orders that threaten locals' livelihoods. Officials "directed that the City of Solvang will not actively enforce these latest State shutdown orders, and that the City request the County and State regulators to prioritize education and that they also not enforce the orders within the City limits," according to a letter from Mayor Ryan Toussaint.

None of this should be a surprise. Small businesses have taken it in the teeth from restrictions that cut them off from customers and cash; data gathered by Yelp shows many of them closing permanently. Restaurants, which traditionally have tight profit margins to begin with, have been especially hard hit.

"Many of those in the Twin Cities and greater Minnesota restaurant industry have told the Star Tribune that they feel they may never recover," the Minneapolis StarTribune reported this week.

"As of today, 17% of restaurants—more than 110,000 establishments—are closed permanently or long-term" as a result of this year's economic distress, the National Restaurant Association announced on December 7.

Fatigue with lockdown orders was predicted by experts months ago, and voiced by the public in growing numbers.

Americans "are far less willing to comply with shelter-in-place advice today than they were in the early weeks of the coronavirus pandemic this spring," Gallup reported last month. Forty-nine percent "say they would be very likely to stay home for a month if public health officials recommended it due to a serious outbreak of the virus in their community. This contrasts with solid majorities in the spring who said they were likely to comply with such shelter-in-place advice, including a high of 67% in late March/early April."

Politicians actively fanned the flames of resistance with their "rules are only for the little people" flouting of their own orders. Amidst a flurry of high-profile examples, California Gov. Gavin Newsom's expensive gathering with other officials at The French Laundry stands out for its arrogance. Why should regular people driven to the brink of poverty and despair pay any attention to the dictates of such creatures?

In distress and after due consideration, many Americans have decided that they shouldn't comply. Individually and in organized groups, often with the support of their communities, people are pushing back against lockdown orders that they find more threatening than COVID-19.

Mayor de Blasio, Cuomo, and their colleagues near and far may loudly announce new restrictions on life, but they're going to find ever-shrinking ranks willing to listen.