San Francisco Board of Supervisors Passes Ban on Smoking Tobacco, but Not Cannabis, in Private Apartments 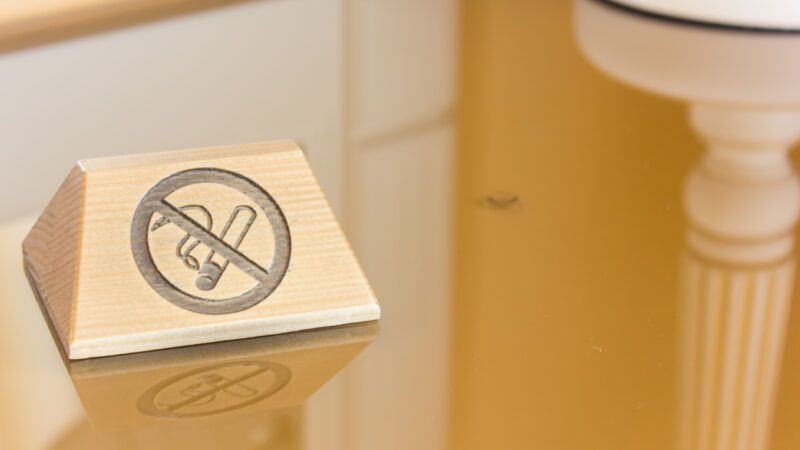 The San Francisco Board of Supervisors has banned people from smoking in their own apartments.

On Tuesday, the San Francisco Examiner reports, the board voted 10–1 in favor of a bill, sponsored by retiring Supervisor Norman Yee, to prohibit smoking tobacco inside private dwellings in buildings with three or more units. Violators of the new law could receive fines of up to $1,000 for smoking.

The version of the bill that passed out of committee last month had also applied to smoking legal cannabis. An amendment adopted by the board on Tuesday exempts marijuana from the ban. That change came at the behest of cannabis advocates who argued that the bill was a "classist" assault on apartment-dwelling medical marijuana users.

"The legislation seeks to protect air quality for nonsmokers, but would do so at the cost of the health and civil liberties of cannabis users including seriously ill medical cannabis patients," wrote Nina Parks of the city's Cannabis Oversight Committee in a letter opposing Yee's bill. "The ordinance would disallow smoking, but only for people in multi-unit residential buildings, meaning that San Franciscans who can afford to buy free-standing homes would be unaffected and could still smoke in peace."

Exempting cannabis smoke from the bill stops San Francisco from effectively reversing marijuana legalization for people who live in multifamily housing. (It is illegal to smoke cannabis in public or inside businesses, save for the city's cannabis lounges, which are closed during the pandemic.) But it also undercuts the justification for the bill, which is to prevent non-smokers from being bothered by invasive fumes.

Various health groups, including the local chapters of the American Cancer Society Cancer Action Network, the American Heart Association, and the San Francisco Tobacco-Free Coalition, endorsed Yee's bill as a means of cracking down on dangerous second-hand smoke. That argument is pretty thin, given the mounting evidence that the dangers posed by second-hand smoke have been wildly overblown.

In response to this growing evidence, supporters of smoking bans have shifted their justification for these laws from guarding against the dangers of second-hand smoke to stigmatizing smokers themselves. If your bad habit is illegal in public, the thinking goes, there's a greater chance you'll give it up.

But even if one accepts that the government should be imposing a social stigma on a victimless activity, that wouldn't justify San Francisco's ban on smoking in private apartments, given that there is no one else around to make one feel stigmatized.

Indeed, to if this new ban compels people to smoke on public streets, it might actually lessen the smoking stigma.

Of course, there are plenty of people who would rather not have to smell tobacco smoke in their own homes. Fortunately, there's a way to accommodate that preference without restrictive nanny state laws, as I wrote last month:

People's ability to find a building that caters to their indoor smoking preferences is made much more difficult by San Francisco's ban on apartments in much of the city. That shortage of housing is forcing these two groups of people to live cheek-by-ashtray in whatever homes they can find, leading to conflict.

Surely a better solution would be to legalize new construction so that consumers can choose from more types of housing in more places. Smokers and nonsmokers alike would then be more able to pick environments that better suits their needs.

The city's Board of Supervisors will have to take a second, final vote on the ordinance before it's sent to the Mayor for final approval.