The Man Who Finished Last

One presidential candidate received approximately 29 votes. He's surprised he got that many. 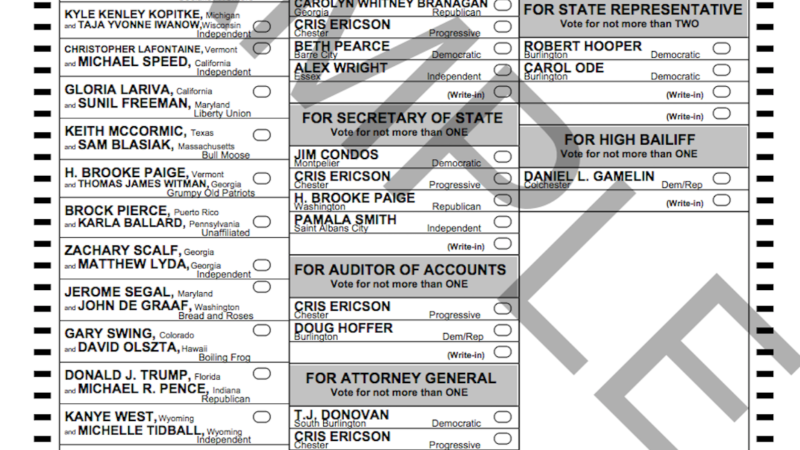 Zac Scalf is an Iraq War veteran, a Texas A&M grad, and the content production manager at Nine Line Apparel, a store in Savannah, Georgia. He is also, according to the ongoing tally at Dave Leip's Atlas of U.S. Presidential Elections, running last in the presidential race, with a current total of 29 votes. That's 97 fewer than Keith McCormic of the Bull Moose Party and 112 fewer than Gary Swing of the Boiling Frog Party—though Swing might belong on a different list, since his website claims he was running for "president of Vermont."

Since Scalf wasn't on the ballot in Georgia, he didn't get a chance to cast a vote for himself. (He voted for Donald Trump instead.) But he wasn't really trying to win. The whole thing was a "social experiment," he tells me: It's easy to get on the ballot in Vermont—"and that's the way it should be"—so he flew up, got himself listed as an independent candidate, refrained from doing any campaigning at all, and waited to see what would happen. "On Election Day, I was sitting here at work and I thought it would be really funny if someone voted for me," he says. So his support exceeded his expectations. "Twenty-nine people went in that voting booth and checked my name and knew nothing about me."

"Imagine if you did something," one of his friends told him afterward. "You're like 12,000 votes away from Kanye." (More like 68,000, but the point stands.) Scalf did a good enough job of keeping mum about his campaign that when I called his workplace trying to find him, the woman who answered the phone seemed completely perplexed at the news that her co-worker had been on the ballot. "On the ballot?" she asked. "For what?"

While Scalf finished last among the officially recognized candidates, he still outpolled an assortment of figures who attracted write-in votes. I don't have the full national totals for these, but one state has helpfully listed all its presidential write-in votes online. It's the same state that gave Scalf a place on the ballot.

In Vermont, the king of the write-ins was Sen. Bernie Sanders (I–Vt.), who got 619 votes—0.17 percent of the total. (That's still a come-down from 2016, when Sanders got 5.68 percent and finished third in the state, ahead of both Gary Johnson and Jill Stein.) Another 78 Vermonters voted for Tulsi Gabbard, 42 voted for Andrew Yang, 37 voted for Mike Pence, and…

You know, I could list some more people who did better than Scalf, but our interest here is in who, in Vermont at least, did worse. Among the many stragglers, I see 18 votes for Dr. Anthony Fauci (spread across various spellings), eight votes apiece for Ron Paul and Vermin Supreme, six for Oprah, four for Dwight D Eisenhauer (sic), and four for Willie Nelson. (That's three fewer than Willie got in 2016.) Various versions of William Weld's name (including "Whollem Weld") got seven votes between them, Ralph Nader got four, Hunter Biden got three, and the late Ronald Reagan got two. The many options who received just one vote include Rosa Luxembourg, Justin Amash, Keanu Reeves, Betty White, Jesus Christ, the Wu-Tang Clan, "DISMANTLE TWO PARTY SYSTEM," and both Dwight Schrute and Michael Scott.

The last of the one-vote crowd to be listed on the Vermont secretary of state's website, and thus in at least one sense the man in last place, is the conservative writer David French. Those of you whose memories go back to the think-piece kerfuffles of 2019 may vaguely remember French as the target of Sohrab Ahmari's much-discussed essay "Against David French-ism." I don't see any votes for Ahmari here, so I guess we can say that the voters have spoken and Frenchism came out ahead.

But I'm going to give the last-place crown to the man who made the effort to get on the ballot and then made literally no other efforts to get elected at all. Scalf thinks more states should make ballot access as easy as Vermont does: "You shouldn't have to be a billionaire to be part of the democratic process and be part of what makes America awesome," he says.

He adds: "People should take it more seriously."