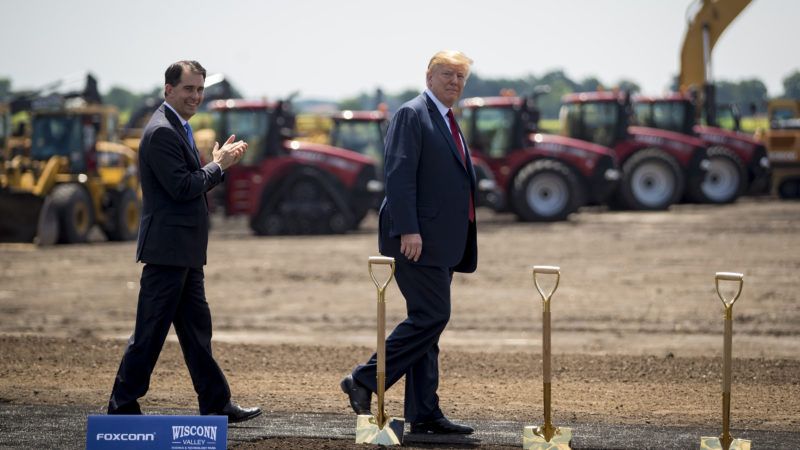 In June 2018, President Donald Trump and then–Gov. Scott Walker of Wisconsin broke ground on the outskirts of Milwaukee for what was supposed to be a $10 billion, 20 million-square-foot factory for Taiwanese tech giant Foxconn.

It was going to be "the eighth wonder of the world," Trump said, proof that he was "reclaiming our country's proud manufacturing legacy"—even if the project was dependent on $3 billion in subsidies from the state of Wisconsin, one of the largest corporate handouts in American history.

A little more than two years later, the factory that was supposed to produce LCD screens for TVs and smartphones doesn't exist and "probably never will," reports The Verge this week in a must-read investigation into the downfall of Wisconsin's propped-up Foxconn project. The buildings that have been built on the plot of land where Trump and Walker overturned ceremonial shovels of dirt two years ago are being used for storage, not manufacturing. Promised renovations to a decades-old skyscraper in downtown Milwaukee—once intended to be Foxconn's U.S. headquarters—have not materialized. Neither have most of the 13,000 jobs the company promised to create in return for piles of public cash.

"Even the handful of jobs the company claims to have created are less than real: many of them held by people with nothing to do, hired so the company could reach the number required for it to get tax subsidy payments from Wisconsin," writes The Verge's Josh Dzieza. "Foxconn failed at that objective, too: last week, Wisconsin rejected the company's subsidy application and found it had employed only 281 people eligible under the contract at the end of 2019. Many have since been laid off."

Walker's administration promised Foxconn $3 billion in subsidies, but the administration of current Gov. Tony Evers, a Democrat, sent a letter to Foxconn last week denying the first round of those payments. The scope of the project had changed dramatically since the initial deal was inked, state officials said. In a statement to The Wall Street Journal, Foxconn called that decision "a disappointment and a surprise that threatens good faith negotiations."

It's quite the opposite, in fact. Cutting off Foxconn's subsidies is about the first bit of good news to come out of the massive boondoggle—and the fact that the development hasn't worked out is anything but a surprise.

For one thing, the math never added up. The state's Legislative Fiscal Bureau, a number-crunching agency similar to the federal Congressional Budget Office, calculated that it would take the state until 2043 to recoup the $3 billion handout, which was the largest such subsidy in Wisconsin history. Even if all 13,000 promised jobs went to Wisconsinites, the tab would be more than $230,000 per job created, the bureau found.

A separate analysis conducted by the Mercatus Center, a free market think tank based at George Mason University, found that the higher taxes needed to cover the cost of Foxconn's tax breaks would "decrease Wisconsin's long-run GDP by about $20 billion over the 15-year life of the handout." And that tally didn't include the cost of local utility infrastructure updates, which the state promised to cover in full as part of the deal with Foxconn.

Almost from the start, there have been red flags surrounding the Foxconn project. The town of Mount Pleasant, Wisconsin, used eminent domain to seize productive farmland for the now-defunct LCD factory project. Walker struck the $3 billion subsidy agreement without going through official governmental channels. And Foxconn has a long history of failing to live up to job creation promises connected to public giveaways.

The cherry on top of this expensive and rapidly melting milkshake is the fact that the whole project was meant to secure Walker's legacy and boost Trump's economic message. The former had been a darling of the tea party movement back when conservatives championed smaller government, but the Foxconn deal had always been more about economic nationalism and the fetishistic approach to industrial jobs that Trump has elevated to the forefront of the Republican Party.

It turns out that all of that was a shimmering illusion. There is no Foxconn factory. Walker's legacy is now defined as much by a poorly conceived economic development scheme as by his victories over public-sector unions. And Trump's economic nationalism has predictably failed once again.