Who's Worse on Housing, Trump or Biden?

When it comes to the two major party candidates' housing plans, libertarians are left looking for the lesser of two evils. 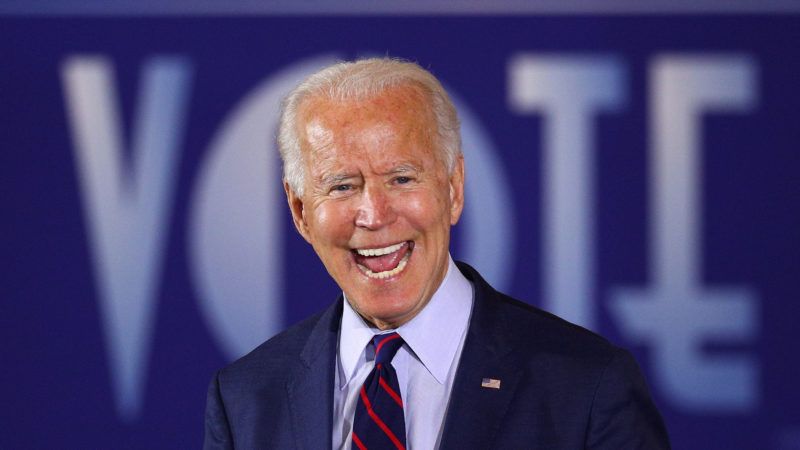 President Donald Trump's pitch to the suburban voters he badly needs is that he saved their neighborhoods from destructive housing policies that a Joe Biden administration would reinstate and expand.

"Suburban women, will you please like me?" said Trump at a rally in Jonestown, Pennsylvania, on Tuesday. "I saved your damn neighborhood."

It's not a new pitch. Since this summer, the president has been touting the fact that his administration scrapped an Obama-era fair housing rule. That rule, he argues, would force low-income housing into tranquil suburbs; should Biden win in November, he says, that will be reversed.

So how exactly would a President Joe Biden eliminate the suburbs?

The bill Trump is referencing is the Housing, Opportunity, Mobility, and Equity (HOME) Act, sponsored in 2019 by Sen. Cory Booker (D–N.J.). It would attach conditions to funding from the federal Community Development and Surface Transportation block grant programs, requiring states to implement strategies for making housing more affordable and "inclusive."

Biden's housing platform endorses the HOME Act. It also says that he would direct his transportation and housing secretaries to identify other federal grant programs that can be amended to require states and localities to amend their zoning codes.

It is this—encouraging new construction in tightly regulated areas—that Trump calls the death of the suburbs. It's also an approach some free marketers have embraced, given the deregulatory nature of many, though not all, of the HOME Act's policies.

"Localities should show real progress in deregulating onerous barriers to housing development and righting the wrongs of redlining in order to receive HUD funding and even transit dollars," says Michael Hendrix, state and local policy director at the Manhattan Institute.

Programs like the Community Development Block Grant program, he says, send a lot of money on a per capita basis to wealthy communities that maintain some of the most restrictive regulations on housing development.

"We should really question what exactly we are incentivizing here," Hendrix tells Reason. "Are we incentivizing more regulation and more exclusivity? That hurts everyone."

Before the president adopted his "war on suburbs" rhetoric this year, he favored a limited version of this very approach: requiring recipients of federal housing dollars to report on specific things they're doing to deregulate their housing markets.

The idea here is twofold: to give the feds more leverage over the most exclusive jurisdictions (who might prioritize their own local zoning codes over federal housing dollars, but would hate to lose federal transportation funding), and to create a rational link between land use policy and transportation funding.

On the other hand, the more leverage the federal government has over state and local governments' land use policies, the greater the risk that leverage is used for policies that have little to do with free markets.

In addition to its deregulatory aspects, Booker's HOME Act would also encourage states and localities to tax vacant land and ban landlords from considering a tenant's criminal history or source of income. And while the legislation does encourage localities to eliminate specific policies that stymie housing development, it does so, in part, to encourage the construction of new below-market-rate units that are restricted to renters making specified incomes.

"It's become quite popular among left-of-center urbanist types to see inclusionary zoning [where new construction is required to have a certain number of these below-market-rate units] as a panacea," says Marc Scribner, a transportation policy researcher at the Reason Foundation (which publishes this website).

These programs don't have a great record. New York City's inclusionary zoning program has produced a paltry number of new units (about 2,000 in a city of 8 million), most of which have benefited from public subsidies.

Inclusionary zoning policies in the D.C./Baltimore area, according to one 2019 study, have been associated with increased housing prices, as developers increase prices to cover the costs of the below-market-rate units they're required to build.

Hendrix acknowledges that giving the federal government more leverage over land use decisions comes with the risk that they'll encourage counterproductive policies. But, he says, it's a risk worth taking as long as those federal grant programs are there.

"For better or worse, the federal government funds a lot of transportation in America and doles out a lot of dollars in grants to localities," he says. Attaching strings to those dollars so that they are not going to the jurisdictions with the most restrictions on housing development is an improvement on the status quo.

The ideal libertarian response might be just to eliminate federal transportation and housing grant programs. The feds wouldn't have any leverage to encourage localities to deregulate their housing markets, but they also wouldn't be subsidizing their exclusivity either.

As a matter of practical politics, that's unlikely to happen anytime soon.

While budget plans put out by the Trump White House have called for eliminating Community Development block grants and reducing federal transportation spending, none of those cuts were ever enacted. Since the president has also ended his administration's efforts to retool fair housing rules to encourage local deregulation, Trump's approach basically boils down to doling out the same amount of grant money while asking less of the jurisdictions receiving it.

Biden's housing plan, meanwhile, would tie some deregulatory strings to the money going out the door but also greatly increase the amount the feds spend on housing. In addition to his embrace of the HOME Act, Biden backs more tax credits for first-time homebuyers and lower-income renters. He also promises to create a $100 billion Affordable Housing Trust fund.

Libertarians are left to decide which approach is the lesser evil.