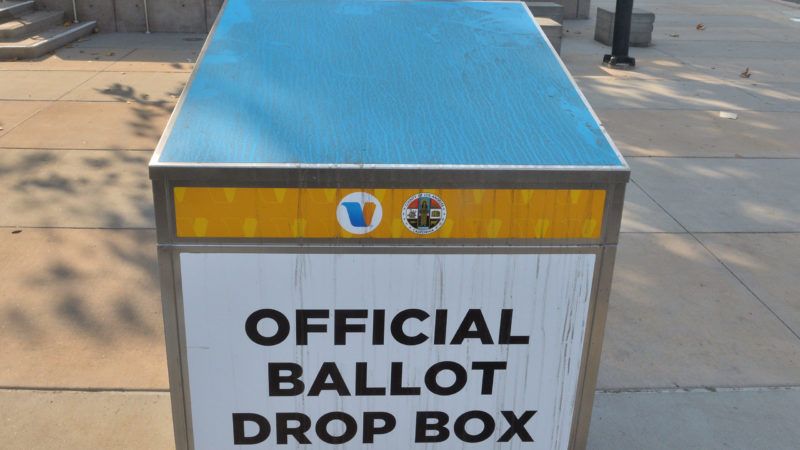 On Election Day, there will be literally hundreds of polling places open in Harris County, Texas—which makes sense because more than 4.7 million people live in the county that includes Houston, America's fourth-largest city.

But voters who requested absentee ballots will have to either put them in the mail or return them to a single location: a parking lot outside the Houston Texans' NRG Stadium. That's because Republican officials in Texas—like in Ohio and elsewhere—have ordered counties to have no more than one ballot dropoff location.

In a ruling issued earlier this week, the U.S. Court of Appeals for the 5th Circuit upheld Texas' limit on ballot dropoff boxes and dismissed concerns about suppressing votes. "One strains to see how it burdens voting at all," the three-judge panel concluded, since the allowance of a single absentee ballot dropoff box in each country does not limit other options, such as mailing in ballots and voting in person at a polling place.

States are allowed to set their own election rules as long as those rules don't run afoul of federal protections against discrimination and disenfranchisement. Texas has not restricted the ability to vote, merely limited how much it will expand the availability of absentee voting in light of the COVID-19 pandemic. The federal courts are right to be judicious about overturning those duly set rules.

Still, it's difficult to look at the available data regarding absentee balloting for the 2020 election and conclude that these Republican-backed efforts are anything other than a cynical ploy to salvage an election that could get ugly for the GOP. In states that track the party affiliation of voters who requested absentee ballots, the numbers are overwhelmingly tipped towards Democrats. But requested ballots mean nothing until they are returned—and therefore any barriers erected to reduce the number of ballots returned is likely to help Republicans.

Not only have Democratic voters requested more absentee ballots, but they've also returned those ballots at a higher rate. According to the U.S. Elections Project, which is run by the University of Florida political scientist Michael McDonald and tracks ballot data, there have been more than 7.5 million mail-in votes cast in the 14 states that track party affiliations of voters using absentee ballots. In those states, a limited but significant cross-section of the country as a whole, 56 percent of mail-in votes have been cast by Democratic voters and only 23 percent have been cast by Republicans.

As the COVID-19 pandemic has caused a surge in the number of absentee ballots requested and cast, Republicans may have fallen behind, in part, because President Donald Trump has been so critical of mail-in voting.

"Absentee voting gives neither party a political advantage, but the political party or the candidate that has a concerted, focused effort on encouraging absentee voting does have an advantage," former Pennsylvania Gov. Tom Ridge, a Republican who recently announced that he plans to vote for former vice president Joe Biden, told Reason in August. "It seems counterintuitive and counterproductive for the president to be opposed to it when, frankly, Republicans are going to have to use it."

Republicans have already missed that opportunity, as the number of requested absentee ballots in the country makes clear. Now, facing an uphill battle on Election Day itself, the party may be hoping to make some marginal gains by finding legal avenues for reducing the number of absentee ballots that are successfully returned, and thus counted.

In close states, every little bit could matter.  In the key swing states of Florida and North Carolina, for example, Democrats have cast 54 and 53 percent of the mail-in ballots already returned, respectively. Republicans account for just 28 percent in Florida and 17 percent in North Carolina, according to the U.S. Elections Project data.

If partisanship maps itself onto not only who voters support but how they vote, it creates opportunities for election officials to play these sorts of games—restricting or elevating absentee balloting or in-person voting in the hopes of boosting one side over the other.

Democrats are guilty of doing this too. In Pennsylvania, where the state Supreme Court is controlled by judges elected as Democrats (Pennsylvania's judges are technically non-partisan but are elected to the court in partisan contests), judges have effectively rewritten the state's election laws to require that mail-in ballots received by November 6 be counted, as long as the ballots were not mailed after Election Day. Like what Republicans are doing in Texas, this is a subtle way of advantaging one way of voting over another.

Until a court says otherwise (and perhaps even then, depending on appeals rulings) all of this is legal. But it's also ugly, cynical, and corrosive to the legitimacy of elections. Unfortunately, both major parties are happy to put their thumbs on the scale.